Bangkok has two main areas for an evening out: Banglamphu and Sukhumvit. In addition to these, there are nightclubs elsewhere in the city, with rooftop bars and bars from well-known hotels being the most popular. However, they are so rare that it is worth finding out in advance.

Beer is the most common beverage and its price varies quite a bit. Since the appreciation of the Thai baht, prices have fallen slightly, but still the cheapest large beers, many of which are happy hour deals, cost from 80 baht upwards. The most common and cheapest beers are Chang and Leo, and are drunk from either 0.32-liter or 0.62-liter bottles, the larger of which is a much more profitable purchase, as the small can cost 60 baht and the large 80 baht. Beer is about the strength of A-beer, and almost in any place, table service is an issue.

Serving fees are not common, but can be expected in some tourist favorite places. Nightlife continues in some areas well into the night, but laws vary, and from time to time everything ends at 01 and sometimes again bars can be open for longer. Since the 2014 coup, things have tightened even more.

Smoking is not allowed indoors, but many bars are partially outdoor or on the terraces and are non-smoking. Unlike some Finnish publications, e-tobacco can be claimed with water quite legally, although it is not common and is equated with smoking. E-tobacco-related by-products such as liquids and atomizers are not readily available, so you should take them with you on your trip. According to the latest information, the law banning the sale of e-tobacco-related by-products will be repealed, but so far it is not advisable to buy liquids of any origin from any market or stall. 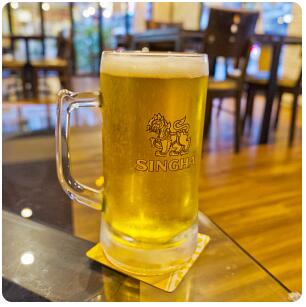 There are many different streets and areas in Banglamphu where you can spend the evening.

The most clichéd and perhaps worst street for an evening out in Banglamp is Khao San Road. The street became familiar to the general public from the book and especially the film The Beach, but the area has changed greatly since the 1990s. It has long been a perfect tourist trap, with a huge crowd every night, especially from November to March. The Thais there are only workers there, and the prices of drinks are higher than in many nearby streets. From around 7 pm to 8 pm, the street becomes crowded with difficulty moving and is not a good street for accommodation, as it is also an extremely noisy place. At its best, it’s early in the evening, when the evening is just dark, and there are many bars, for example, with live music or sports, which are difficult to watch in Thailand due to time differences.

One bar that is more glamorous than normal is The Roof Bar, and another that attracts many is the Irish bar Mulligan’s. 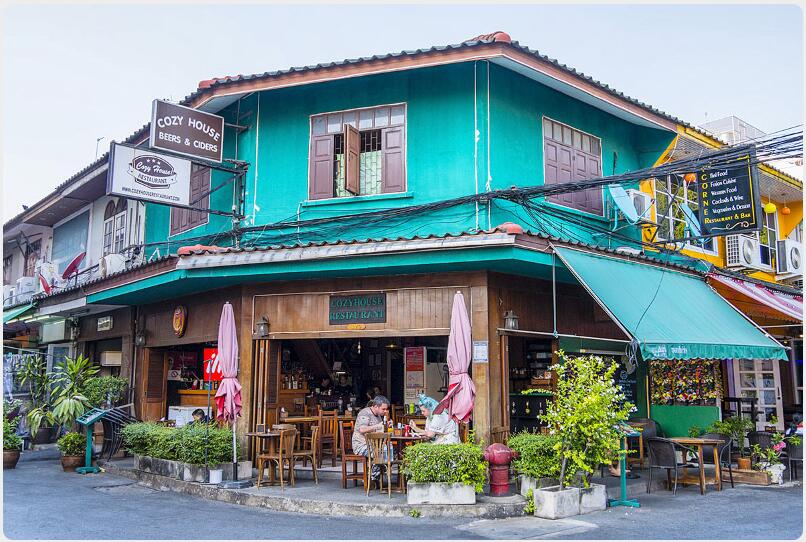 Almost everything along Khao San Road is more expensive than normal, and it’s worth being careful there after dark. Nothing should be left unattended, and the drink should not be released from the eyes, as something stunning can be put into it. Khao San Road is an experience that every young and young-minded person should visit to experience, but not everyone stays there longer than a short visit. 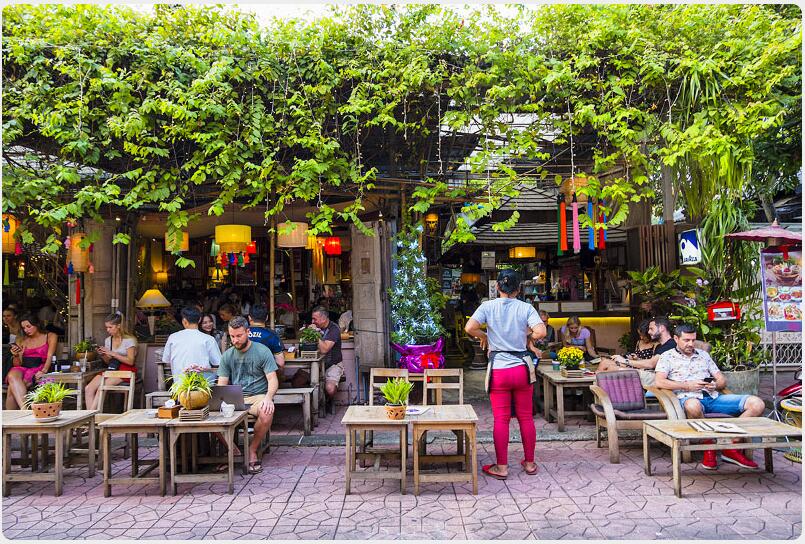 The two-part Soi Rambuttri, with direct access from Khao San Road via Susie Walking Street next to Mulligan’s, is a much better street than its more well-known neighbor. Along with it there are cheaper prices, less crowds and somewhat more local atmosphere. The street is winding and multifaceted, and its best parts are close to the riverfront and the National Art Museum.

Along Soi Rambuttri, you can easily find a bar where beer costs 80 baht, at least during happy hour (usually before 7pm to 8pm), and there are plenty of places with live music and sports screens. This street is also occupied by terraces, it has more street food than Khao San Road and many prices are cheaper along it. However, eating along it is not a good idea except in an emergency or late at night, when there are few places open elsewhere. Soi Rambuttri is also known for its dozens of massage sites, and there are also quite a number of tattoo sites there. All places showcase their prices spectacularly, and like along Khao San Road, checkers are common and active. If there is no checker in place, it is probably a cheaper place than others.

The bars change on the street from year to year, but many eateries have been there for a long time. They have attractive terraces where a couple can visit once for a meal and have a few drinks. There are a lot of good terrace bars next to Susie Walking Street, in a bend, but the prices are quite high.

The most adult and affordable area on Soi Rambuttr has an extension across the busy street with bookstores, restaurants, clothing stalls and also bars. Many guest houses have inexpensive bars, and there is plenty to suit all tastes bend.

Other areas of Banglamphu

On the banks of the river there are a few terrace restaurants and also a bar from which it is nice to watch the illuminated riverbanks after dark in the evening. Prices by the river are completely aimed at tourists, but drinks are still clearly cheaper than in Finland. For example, Sheepshank is a gastropub with good food and small brew beers.

Perhaps the best, or at least the quietest and least congested area in Banglamph for an evening out as well as a meal or juice to enjoy during the day is the area on the other side of the canal. You can get there, for example, white Sumen Fortress along the adjacent Venetian bridge, although more bars will be immediately met if you go there by crossing the Samsen Road bridge or the “fish feeding bridge ”.

The area is vast and full of all sorts of alleys, and it’s worth escaping the busy traffic of the rest of Banglamp and endless similar shops and street vendors. There is a charming atmosphere on the banks of the canal, and for the first time it makes the most sense to go there in bright weather. The area is also good for accommodation as there is little noise but the distance to the surroundings of Khao San Road is only a few hundred meters.

One place where you can hear live music is Ad Here the 13th, right next to Samsen Road and the canal.

There are many bars near Si Lom Metro Station and it was once a great place to spend the evening. However, it has a bad reputation today, as there are a lot of so-called go-go bars and bars full of bar girls and a variety of nightlife side effects. Patpong is the so-called. an area favored by sexpatie with paid women and various sex performances. It is dangerous in many ways, and you can lose a lot of money, valuables, or at least your reputation or health.

There’s also an evening market, which is more harmless, but that too has gotten bad feedback . 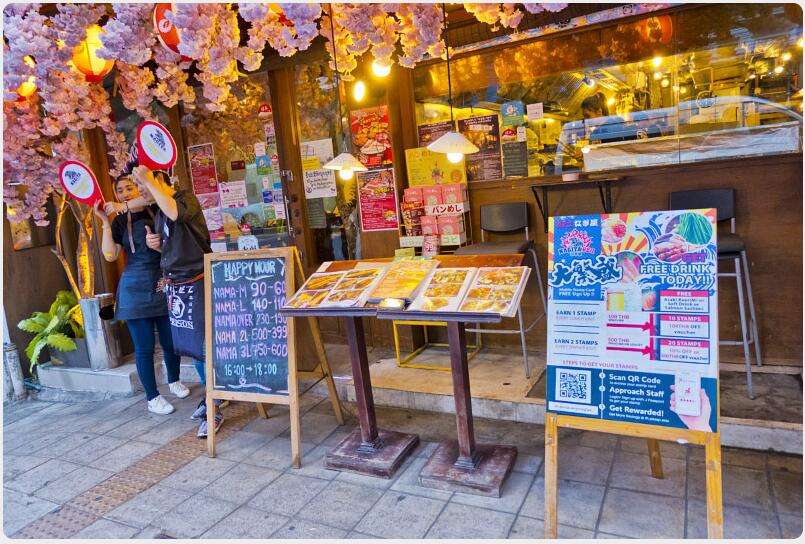 The coolest, most expensive and most adult place to spend the evening is Sukhumvit, which is a large area. It’s a neat area in many ways, with some of Bangkok’s finest nightlife, but there are also questionable side streets.

Sukhumvit Road is Bangkok’s most sophisticated and stylish place to spend an evening. There are a lot of good bars near the Thong Lo BTS station in particular. There are also quite a few of them near Ekkamai Station and Phrom Phong Station. Soi 11 near Nana Station is also known for its many bars and nightclubs .

One of the most diverse and considered by many to be the best bars in Bangkok is WTF or Wonderful Thai Friendship. Very close to Studio Lam is a bar with dishwashers and live music.