Parliamentary elections were held in December 1931 and January 1932. The national bloc, which was led by the notables, was looking for an “honorable cooperation” (President Jamil Mardam Bey) let in with the French and felt this in the election result: He received only 17 out of 69 seats. The French sought a treaty with Syria that provided for a common foreign policy between the two countries. Syria should be responsible for the internal order, in the case of a common defense Syria should provide all military logistics, including military bases, airports and ports, assuming all costs. The contract should have a term of 25 years and be available again after 20 years. The military was to remain in the Alawite region and the Druze Mountains for another five years. The nationalists called for a general strike against this treaty. The contract was to receive the approval of the French parliament after a three-year probation period and on December 20th, enter into force in 1939. The Syrian parliament discussed the treaty for six hours and rejected all the single-handed agreements reached with President Jamil Mardam Beey in Paris.

According to politicsezine, an important aspect of national unity and territorial integrity was defended by the Syrians, as the treaty highlighted the difference between Lebanese, Druze, Alawites and Syrians. In addition, the Druze Mountains and the Alawite region were to be placed directly under French leadership for a further eight years.

In a haggle with Turkey, France left the Sandjak Alexandrette (Iskenderun) with its natural trading port to Turkey. The Arab nationalists fought for the preservation of the sandjak, and France invaded on July 4, 1938 and signed a friendship treaty with Turkey, which in turn led to the invasion of Turkish troops.

The elections proposed by the League of Nations came to an end under the Turkish bayonets. For the Syrian nationalists, the sandjak was economically, geographically, historically and ethnographically part of Syria. No restrictions should be placed on the Turks in terms of their language and culture. The leader of the Syrian movement in the Sanjak was Zaki al-Arsuzi. France granted Syria independence in 1942, but refused to withdraw its troops.

Even when the Vichy troops collaborating with the Nazis had already been disbanded in 1946, France still brought Senegalese colonial troops to Damascus and refused to withdraw. After 1945, there were permanent demonstrations for the country’s independence in both Lebanon and Syria. Even Britain ultimately backed the Syrians and kept the French troops in the barracks because they had started bombing the city. It was not until 1946 that the French withdrew their last troops from Syria.

Israel was founded in 1948. Israel’s victory in the war against the Arabs had a major impact on Israel’s neighboring states. The displacement of the 750,000 Palestinians made Arab politics appear to be a major dilemma. Most of the people fled to Jordan, but also to Syria and Lebanon. In Syria, politicians accused the military of incompetence, and the military, in turn, blamed politicians for the disaster. As a result, there were three military coups in 1949 by Generals Husni al-Zaim (who was supported by Miles Copeland from the CIA), Sami Hinawi and, most recently, Adib al-Shishakli.

Adib al-Shishakli (1909-1964) resigned from the presidency in 1954, and free elections were held for the first time under his successor, the civilian Hashim al-Atassi. All social forces, the notables, members of the Ba’ath party, communists, Nasserists and the Muslim Brotherhood, all of whom Shishakli had marginalized, were involved and obtained seats in parliament.

The “Party of the Arab Revival” – Ba’ath Party – officially founded in 1947, merged with Akram Haurani’s “Arab Socialist Party” in the early 1950’s and thus formed a strong political factor. Pan-Arab ideology flourished after the 1956 war, when Nasser nationalized the Suez Canal and subsequently Israel, Great Britain and France launched a war against Egypt. The Ba’ath Party, whose motto was “Freedom, Unity, Socialism”, wanted a pan-Arab state together with Egypt. This union was established in 1958.

Gamal Abdel Nasser, the President of the United Arab Republic, centralized the state structure, and all ministries were now in Cairo. The notable politicians of the National Bloc and the communists, who wanted to prevent the Ba’ath Party from becoming too strong, opposed this development. In the time of the Union (1958-1961) a law regulating agricultural relations was passed. It was the first land reform that was intended to restrict large land ownership. But Gamal Abdel Nasser’s centralism, his persecution of the communists and the Muslim Brotherhood, as well as his attempt to found a unity party and no longer admit any other parties, led to a counter-movement led by the Syrian military, including Hafez al-Assad. September 27, 1961 the Syrian army put forward, and Syria left the Union. 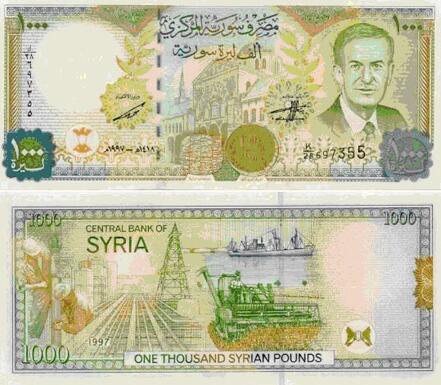