The presidential elections in 2009 the surprise winner in the first round with 52.5% of votes Abdallah Abdel Aziz, the leader of the coup against President Abdallahi. The turnout is 64%. International observers and the Mauritanian opposition had expected a majority rejection of military rule. The African Union, the Arab League and the International Organization of Francophone States sent 320 election observers. Although there are individual indications of irregularities, international observers confirm that the election was carried out correctly.

Aziz’s electoral success is based on his skillful politics.

Aziz presents himself as the “President of the Poor”. He distributes material benefits to the population, such as further subsidies for food and petrol, an export ban on Mauritanian fish and targeted investments in public goods and infrastructure (roads, water pipes, electricity network). The direct contact with the population, coupled with concrete material achievements as a sign of his ability to act, have given Aziz voices in the marginalized sections of the population.

A clever symbol policy is also important. He emphasizes the mismanagement of the previous governments and public administration. He first freezes the controversial diplomatic relations with Israel and then closes the Israeli embassy.

After his resignation from the chairmanship of the State Council, he – according to the constitution – has the President of the Senate Mamadou M’Bare move up a Haalpular. This was the first time that an Afro-Mauritanian headed Mauritania for a few months. By participating in a public prayer in memory of the victims of state crimes against Afro-Mauritanians, he is breaking a taboo. He also announced that he would financially compensate the victims’ families.

He also manages to split the opposition. Individual politicians are leaving the boycott front, thereby increasing the legitimacy of the polls. The FNDD, main bearer of resistance to the coup, did not even manage to put forward a common candidate.

International observers rate the election of Aziz as a novelty in Mauritanian politics, because he was able to win, although influential tribal leaders support other candidates.

The international community showed a consistent stance towards the military government, but at the same time was not interested in permanent stigmatization. She also sees Aziz, the new “strong man” in Mauritania, the best guarantor of stability and the containment of Islamist terror in the western Sahara region. According to constructmaterials, the strategic importance of Mauritania as a stopover for migrants heading for Europe requires a dialogue between the EU and the Mauritanian rulers.

Since he was sworn in as president on August 5th, 2009, the situation in Mauritania has not changed significantly. Poverty reduction and the fight against corruption were the central themes of the Aziz presidential election campaign. There has been little progress in these areas.

Mauritania’s economy is growing and has weathered the global crisis well because the demand for Mauritanian export products, raw materials and fish, is high.

The living conditions of the vast majority of the population are developing less positively because the economy is not creating employment. The majority continue to live from subsistence farming and the precarious informal sector.

The security situation, particularly on the border with Mali and Algeria, remains very tense, although the army has succeeded in preventing Islamist terrorists from entering Mauritanian territory in recent years.

As expected, the incumbent Mohamed Ould Abdel Aziz wins the presidential elections on June 21, 2014. He was able to win 81.9% of the vote. On the other hand, the remarkable success of Biram Ould Dah Ould Abeid, who received the second most votes, was surprising. The anti-slavery activist and chairman of the “Initiative for the Revival of the Movement to Abolish Slavery in Mauritania” won 8.7% of the vote. The turnout of 56.5% was significantly lower than in the 2008 presidential elections, where 64% were achieved. An alliance of the largest opposition parties, including the Islamic Tawassoul, which has been the strongest opposition party since the parliamentary elections in December, called for a boycott the presidential election and hoped for a low turnout.

The clear election victory of President Aziz and his large power base in parliament ensure a high level of domestic political stability.

After the military coup in 2006, the major opposition parties forced a return to democratic conditions by boycotting the military leadership and criticizing an illegitimate regime. They boycotted all elections until 2018. They only took part again in the 2018 parliamentary elections and the 2019 presidential election, making them an active part of the political system. 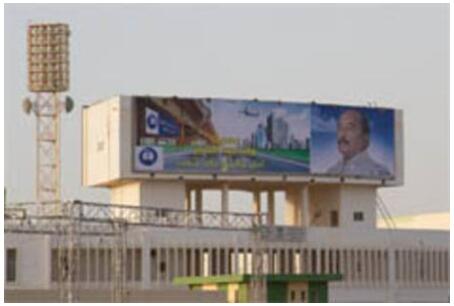