According to internetsailors, Mauritania has experienced numerous waves of immigration and unites very different cultures on its territory. The dominant culture is the Arab-Berber or Moorish culture; the black African ethnic groups continue to cultivate their cultures. Cultural identity is synonymous with ethnic identity. Sunni Islam is the connecting element between the ethnic identities.

An interesting article deals with fixed and respected behavior patterns “Sahwas” that have been passed on through generations.

The Mauritanian culture is characterized by the nomadic way of life. The Khaima (Moorish tent) is still a popular place. Many Moors spend the weekend in Khaimas, just a few kilometers from the center of Nouakchott, in the dunes. Khaimas are often found set up in the gardens of Mauritanian houses.

The handicraft tradition is highly developed. Gold and silver jewelry is just as much a part of it as “transport boxes” made of wood or camel leather.

Traditionally, women’s clothing is very colorful. This applies to both the malafas of the Moorish women and the robes of the black African women. The men’s robe is called boubou.

The culinary culture is poorly developed; The basic foodstuffs in the desert are camel milk and dates.

The most famous dish is the mechoui, a whole roasted lamb with couscous. The national drink is green tea with fresh mint and lots of sugar. The tea ceremony is an integral part of the daily routine. Three spouts are served each time. A Mauritanian proverb says:

Playing Moorish griots is a stringed instrument that is very similar to the kora. Although there are few female Moorish griots, the most important representatives of Moorish music are two women: the late Dimi Mint Abba and Malouma. See also the French-language article with music videos for Dimi Mint Abba. Both musicians come from old Moorish griot families and learned the instrument as children. Malouma was elected to the Mauritanian Senate in 2007.

99% of the population of Mauritania professes Sunni Islam.

The Islam is the secular basis for the coexistence of Berber, Arab and black African populations Mauritania. The state name “Islamic Republic of Mauritania” goes back to this situation. Given the current spread of modern politicized Islamism, this name is rather misleading.

The history of the young state is marked by the growing influence of Islam. Political and economic relations with Arab and Islamic states in particular have strengthened the influence of Islam. The most visible sign was a change in the system of government. A High Islamic Council (consisting of five members) was set up, which the President of the Republic appoints to deliberate on all matters relating to Islam and Islamic culture. The sale and consumption of alcohol was also banned.

Since then, there have also been Islamists in Mauritania who are recruiting their supporters, particularly in the districts of Nouakchott and Nouadhibou, which are inhabited by the underprivileged Haratin. Their number is estimated at a few thousand. Most of them are not considered to be willing to use violence and do not necessarily strive for political power.

On June 30, 2003, the Council of Ministers passed a law declaring mosques public institutions in order to strengthen state control. It obliges the imams to take exclusive account of the Maliki school of law and provides for sanctions against all “who use a mosque for political or sectarian purposes or for a purpose incompatible with ‘silence and respect’”.

The government is responding to the growing importance of Islam by allowing an Islamic radio station and an Islamic party. Interesting a German and an English article on how Mauritania deals with religious extremism.

A Christian minority of around 4,500 people has churches in Nouakchott, Atar, Zouérate, Nouadhibou and Rosso. There is the diocese of Nouakchott. Their religious freedom is guaranteed, but it is forbidden to proselytize Muslims. See also the American government’s International Religious Freedom Report. 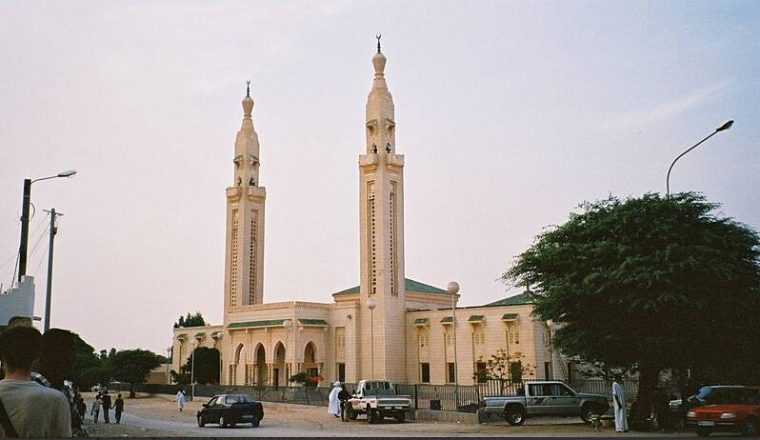 The major Islamic festivals are based on the Islamic calendar and move back 10-12 days per year compared to the western calendar.

The “Commission Nationale d’Observation du Croissant Lunaire” (CNOCL) is responsible in Mauritania for the precise determination. It often makes very short-term decisions and is not necessarily geared towards other Islamic states.