The climate in Mauritania has changed dramatically since the onset of prolonged droughts in the 1960’s, which are part of the Sahel’s wet and dry cycles. The minimum annual rainfall required for agriculture is 150 millimeters. This line has shifted about 100 km in Mauritania since the start of the drought and is now south of Nouakchott. In the 80’s, the desert advanced at a speed of 6 km per year and has reached the Senegal River in some areas. Overgrazing, deforestation, stripping of land around wells, poor farming practices and overpopulation have all accelerated the process of desertification. Humans and animals moved south in search of food and water. The ” Grande Muraille verte”, a reforestation program in several Sahel countries is intended to halt desertification.

The capital Nouakchott is also threatened by the relentlessly advancing desert. For some years now, a cordon vert has been set up with the strong support of the President. It is a reforestation program that is intended to stop the progress of the Sahara.

The already small amount of forest in Mauritania decreased by 43.5% between 1990 and 2016 and is only 0.2% of the total area. There is a risk that the forest will disappear completely by 2060.

The US Geological Survey website provides aerial photographs of irrigation and desertification in southern Mauritania.

The WorldRiskReport 2020 shows that Mauritania is relatively less vulnerable to extreme natural events and catastrophes, ranking 67th out of 180 countries. The high lack of coping capacities prevents an even better rank. The capacity to reduce negative impacts in the event of an incident are disastrous.

According to aristmarketing, Mauritania is very affected by the effects of climate change affected and needs to adapt on two fronts. The capital city of Nouakchott is literally gripped by the consequences of climate change. The sand dunes of the Sahara continually approach from the east and the Atlantic and rising sea levels from the west. On the coast, especially in the area of the capital, there are programs to rebuild destroyed dunes and to protect the existing dunes against destruction. The dune protection belt is damaged by the use of the sand as a building material. The raw material for the so-called “concrete coquillage” is still mined on the beach near Nouakchott. It is a mixture of sand and shells, which is popular as a building material because of its high lime content. In addition to the removal of the sand, recreational activities such as quad and four-wheel drive in the dunes have devastating effects, as the dunes, which are already too low, degrade further. There are also two large gaps in the dunes, the harbor and the fishing port.

For the capital Nouakchott, the situation is particularly precarious, as it is partially below sea level in a sebkha. In parts of Nouakchott you can find large bodies of water all year round. In the summer of 2013, the problem worsened due to heavy rains. Large parts of the city were flooded and the living conditions of the poor deteriorated dramatically. Since then the massive floods have been repeated. As an immediate measure, the water is pumped out of areas that are below sea level and at the same time, the construction of a sewage system is being considered.

An article in the Tagesthemen deals with the situation in Nouakchott and Le Monde reports on the consequences of the heavy rainfall in summer 2020.

Inadequate garbage disposal is a major problem. On the beach, on the side of the road, on the sandy slopes and in depressions where the rubbish naturally collects, rubbish dumps occur again and again. The wind often carries plastic bottles and bags through the streets and the garbage collectors in Nouakchott are fighting a truly hopeless battle. Wild garbage and excrement deposits can be found just outside the city limits. Plastic bags have been banned in stores since January 1st, 2013. They haven’t completely disappeared from the streetscape, but the way they are dealt with has changed a lot. The waste problem has certainly not been resolved, but a first step has been taken.

In principle, the improper handling of garbage is also a major problem. Burning plastic, disposing of used batteries or energy-saving lamps in household waste or dumping faeces on the beach are just a few examples of habits that pose an environmental and health risk.

To date, Nouakchott does not have a functioning sewage system. Since 2015, 40 km of tunnels have been dug in a Chinese project to return water from the city to the sea.

Urban air pollution is caused by increased traffic with old and poorly maintained cars and motorcycles, and wood fires for cooking. More serious, however, is the exposure to mineral and faecal dust that is spread by the wind. 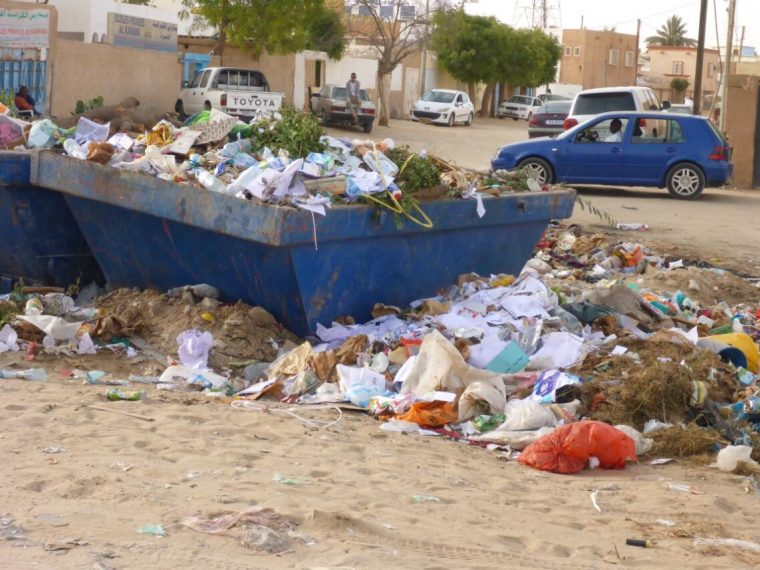 Threat to marine and coastal biodiversity

Fishing, an important economic factor, has been intensified in recent years and has had a negative impact on stocks. The coastal waters of Mauritania are considered overfished. At the same time, this area is ecologically and biologically significant, especially in the global context of biodiversity. In addition, the offshore industry does not produce the raw materials crude oil and natural gas in an environmentally friendly way and thus threatens marine fauna and the coast.