Since 1999, the Poverty Reduction Strategy Papers (PRSP) have replaced the “structural adjustment programs” that had fallen into disrepute at the IMF and World Bank. So far there have been three action plans in Mauritania (2002-2004; 2006-2010; 2011-2015). The action plans are designed to ensure that debt relief is used to reduce poverty.

For more than 40 years, Mauritania’s socio-economic development has been heavily dependent on public international aid. On average, it corresponded to more than 20% of GDP.

In 2000, Mauritania became the first country to benefit from the debt relief initiative for heavily indebted poor countries, with debt relief of $ 1.1 billion. In addition, there was the cancellation of bilateral debts by France. In this way almost 50% of the public external debt was canceled.

As part of the debt relief initiative, Mauritania adopted a poverty reduction strategy in February 2001 with the aim of reducing the poverty rate to 17% by 2015. According to the latest publications, the national poverty line is 31%.

Mauritania’s economic and social development continues to depend heavily on contributions from the international donor community. They contribute around 90 percent to the state’s investment budget.

The national debt is rising continuously since 2010, reaching a value of 2018 82.95% of GDP; since then it has been falling again.

The United Nations Millennium Development Goals were formulated in 2000 and set out eight development goals that are to be achieved in 2015. Successes were achieved in the areas of poverty reduction, access to basic education and the reduction of child and maternal mortality. This also applies to Mauritania; the poverty rate improved to 31% in 2014 compared to 2004 (46.7%), but is still a long way from the target for 2015, which is 25%.

The World Development Report sees the national poverty rate at 31%, the $ 3.1 line at 21.7% and the $ 1.9 line at 5.7%. The World Bank’s publication “Poverty and Shared Prosperity”, which examines income growth among the 40% poorest, is also interesting.

Progress has also been made in the areas of education, health and drinking water supply; the situation of the majority of the population remains unsatisfactory. 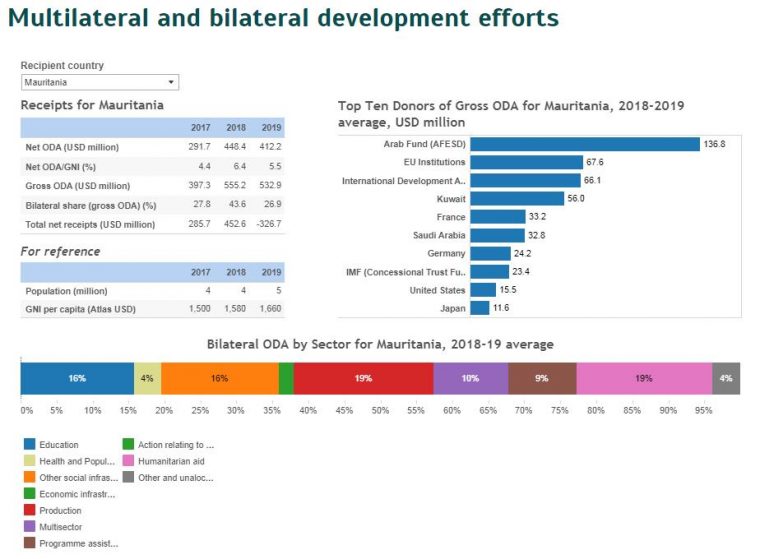 Mauritania has included the SDG in its “Strategy for Accelerated Growth and Shared Prosperity (SCAPP) 2016-2030, making it one of the first countries to integrate the 2030 Agenda into their national development planning.

An institutional framework for steering, coordinating and monitoring the SCAPP has also been established; Monitoring matrix includes 156 indicators, including the SDGs.

Mauritania publishes a Voluntary National Review in 2019, which was presented at a workshop in Nouakchott.

In 2018, UNECA published a report on the implementation of the SDGs in the Maghreb countries. The World Development Report (HDR 2019) also considers the status of implementation in its table section (pp. 323-347). The Ibrahim Foundation report also contains data on Mauritania.

Poverty reduction and the fight against corruption were the main themes in President Aziz’s election campaign in 2009 and 2014. The Mauritanian strategy papers on poverty reduction are rated positively by the IMF and World Bank.

One instrument for poverty reduction is the decentralization policy, which began in 1986 with the creation of 216 municipalities in 1986.

A solemn declaration by the Mauritanian Council of Ministers followed in 1995. The declaration named as one of the goals of the municipal policy, “to initiate local development through the use of participatory methods for the benefit of a good management of the local concerns of the population […]”.

Since then, the decentralization process has been an integral part of government policy. Although the financial base is weak, numerous projects and programs have been launched with the aim of improving the living conditions of the population. The focus is on disadvantaged regions and marginalized social groups.

According to OECD statistics, grants to Mauritania in the context of development cooperation (ODA) rose sharply in 2018. The most important partners are the Arab Fund (US $ 108.9 million) and Kuwait (US $ 58.33 million), which is replacing France as the largest bilateral donor.

The humanitarian aid was in 2018 accounted for 22.4%. The largest donors were the EU and the United States.

Further organizations and their engagement in Mauritania are listed below:

Germany has been working with Mauritania since its independence in 1960 and it is one of the priority countries for German development cooperation.

In November 2015, two technical and financial cooperation agreements worth 29 million euros were concluded in Nouakchott. The government negotiations in December 2018 provide for funding of EUR 43 million.

The funds made available are intended for the projects supported by GIZ with two priorities:

The Federal Institute for Geosciences and Natural Resources (BGR) also supports Mauritania in diversifying the mining sector on behalf of the Federal Government.

The Federal Republic of Germany is also supporting the International Organization for Migration (IOM) in a project to combat human trafficking in Mauritania with EUR 100,000.

As part of its humanitarian aid, Germany is supporting the aid organization OXFAM eV with EUR 720,000 in food security for the population in the Mauritanian regions of Gorgol and Brakna. German development cooperation is providing the World Food Program (WFP) in 2020 with an additional € 2 million, so that the total funding of the BMZ amounts to € 6.2 million.