Since its independence, Mauritania has pursued a policy of integration into the world community. It is a member of the United Nations and its sub-organizations. Its function as a bridgehead between the Arab north and sub-Saharan Africa is also reflected in its membership in regional organizations. Mauritania belongs to the African Union (AU), the Arab League (AL), the Organization of the Islamic Conference (OIC), the Organization of the Sahel States (CEN-SAD), the Union of the Arab Maghreb (UAM), the “Organization for the Use of Senegal River “(OMVS) and the” Committee for Drought Control in the Sahel Zone “(CILSS).

In January 2014, Mauritania took over the presidency of the African Union for one year. The suspension of membership in the African Union as a reaction to the military coups in 2005 and 2008 and the resulting political isolation came to an end. The AU’s 31st summit took place in Nouakchott in July 2018.

According to estatelearning, Mauritania was also a founding member of the West African Economic Community (ECOWAS), but left it in 1999 in favor of stronger ties to the Arab world. Mauritania has been an associate member again since 2016 and is aiming for full membership. In 2017, Mauritania signed a contract with ECOWAS on the free access of goods and people.

Relations with Morocco, which were very tense after independence through Moroccan territorial claims, have normalized and Morocco is now an important trading partner. See also an article on the 50th anniversary of the friendship treaty. With Mauritania renouncing any claims to the territory of the Western Sahara, relations with Algeria have relaxed. Mauritania’s relations with Morocco and Algeria remain complicated.

Relations with Tunisia are friendly. The efforts of Tunisia to revitalize the Arab Maghreb Union (UAM) are supported by Mauritania.

In recent years, Mauritania has intensified relations with its neighbors in the south and east.

Relations between Mauritania and its southern neighbor Senegal fluctuate between cooperation and recurring conflicts. The 12th meeting of the joint Mauritanian-Senegalese commission took place in October 2015. Recently discovered gas deposits off the coast of the two countries will strengthen the cooperation.

Mauritania cooperates with the countries of Mali, Niger and Algeria in the CEMOC (Comité d’état-major opérationnel conjoint); The aim of the cooperation is to improve the security situation in the region and to combat the activities of Al Qaeda in the Islamic Maghreb (AQMI).

Since February 2014 Mauritania has been working in the “G5 Sahel” with Mali, Burkina Faso, Niger and Chad on development and security policy. The focus is on improving the security situation in the Sahel through the fight against terrorism, illegal migration, and drug and arms trafficking. At a conference in February 2018, the international community pledged EUR 414 million to support the G5 Sahel countries and to set up a reaction force. See articles by the Konrad Adenauer Foundation, the Hessian Foundation for Peace and Conflict Research (PRIF) and the Center for Strategic and International Studies (CSIS).

The development policy component of the G5 Sahel, the “Alliance for the Sahel”, aims to promote economic development in the five countries. The donors of the Sahel Alliance will finance over 600 projects with a volume of 9 billion euros from 2018 to 2022.

After the military coup in 2008, which was condemned in particular by the African Union, the European Union and the United States, and the associated cessation of non-humanitarian aid, Mauritania increasingly looked for alternative international partners. Mauritania went to great lengths to deepen its relations with the Arab League (AL) states politically and economically in return for the frozen support of its traditional European / Western partners.

Mauritania hosted the 27th summit of the Arab League on 26-27. July 2016 in Nouakchott after Morocco canceled the implementation. This brought Mauritania into the center of interest in the international media for a few days. The foreign ministers called for the defeat of terrorism.

With the end of the Gaddafi regime in Libya in 2011, a key political and economic supporter of Abdel Aziz’s power apparatus collapsed.

Since then, China, the remaining autocratic Arab states and, at least on a symbolic level, also Cuba, Iran and Venezuela have played an important role. Relations with Turkey are also developing positively. Current studies deal with Mauritania’s relations with Russia and Qatar.

Mauritania has 35 embassies and 28 consulates in 21 countries; In Nouakchott, 30 states are represented with embassies and 27 with consulates. In December 2016, it became known that Mauritania and the Vatican are establishing diplomatic relations.

The security situation in the Sahel region due to the strengthening of Islamist forces such as the AQIM and Mauritania’s role as a transit country for African migrants on the way to Europe and for drugs from South America to Europe have brought Mauritania into the focus of the politics of the European states and the United States.

Information on human trafficking in Mauritania can be found in a report by the American government.

In August 2014, President Abdel Aziz visited the United States for the US-African Leaders Summit and was received at the White House by President Barack Obama. The history of American-Mauritanian relations began in 1960, the year of independence. 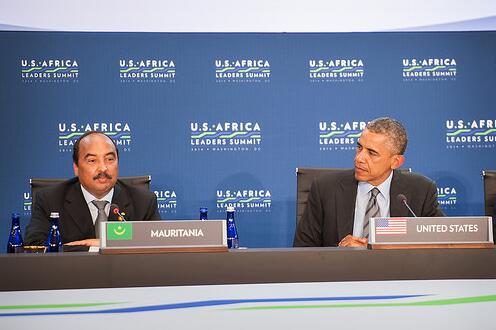