The borders of Mauritania are the result of European colonial policy. Mauritania fills the void between Morocco and Senegal. Endless deserts and the Atlantic coast shape the landscape of a country that only has agricultural land on the Senegal River.

Berber-Arab immigration and the West African kingdoms are the historical base of the country. After independence from France, there were repeated military coups. Mauritania is an important partner of the West in the fight against Islamic terrorism.

According to a2zgov, Mauritania is one of the poorest countries in the world. Mining, fishing and agriculture are the most important sectors of a poorly diversified economy. The oil sector has not yet been able to meet the high expectations. The marginalization of large parts of the black population is seen as a decisive obstacle to development.

In Mauritania, Berber-Arab and Black African ethnic groups meet. The only link is Islam as the state religion. Tensions arise from the fundamental contrast between the Moorish arabophone and black African Francophone population.

The contrast between town and country is great. Rapid urbanization and predominantly difficult living conditions in rural regions characterize the country. Due to the security risks, foreigners have limited travel options. Health care is also poor in Nouakchott.

The official website of the Mauritanian government and the Office Nationale de la Statistique provides current and detailed information about Mauritania. The Mauritanian Statistics Office (ONS), the HDR of the UN Development Program, the African Statistical Yearbook, the African Economic Outlook, the African Development Bank, the CIA World Factbook, the BBC, and Bertelsmann offer an up-to-date overview of important basic data on the state, economy and population Transformation Index and the French Foreign Ministry. For basic data on regions see: Nouadhibou, Adrar and Hodh el Chargui.

Further information in German is available from the Foreign Office, the Federal Statistical Office and the Austrian Chamber of Commerce.

Mauritania has four ecological zones: the Sahara zone, the Sahel zone, the Senegal river valley, and the coastal zone.

The Sahara zone covers the northern two-thirds of the country and shapes the landscape of Mauritania: huge, empty dune landscapes alternating with granite formations.

Sand in different colors and compositions, covers 40 percent of the country’s surface and forms dunes, in all zones except the Senegal River Valley. Shifting dunes can occur north of the 18th parallel.

The large dune areas that mark the western edge of the Sahara and a drainless, sand-filled basin landscape (El Djouf) in the central east are joined by large plateaus to the west, which slope steeply to the coastal plain. The central parts of the country with the largely flat sandstone plateaus of Adrar, Tagant and Affollé are at an altitude of 300–500m.

Due to erosion, some areas were so severely eroded that individual island mountains emerged, including the Kédia d’Idjil on the border with Western Sahara, the highest point in Mauritania at 915 m. With the Ben Amira is the second largest monolith in the world next to the Australian Ayers Rock in Mauritania.

The concentric Guelb er Richat in the Adrar region, which was used for orientation by space missions because of its striking structure, is remarkable. The ESA video on Guelb er Richat is also interesting.

In general, the Sahara zone has little vegetation. On the populated plateaus of Adrar and Tagant, some farming is possible in oases. Springs and fountains provide water and the date palms provide shade.

The Sahel zone extends south of the Sahara zone. It forms an east-west belt of steppes and savannah grasslands. Herds of cattle, sheep and goats move across this zone in search of grazing land. The northern Sahel zone is characterized by dunes with grass and scrub and thorny acacia trees. Further south the vegetation becomes thicker. Higher rainfall enables sedentary agriculture.

The rainy season (hivarnage) starts earlier in the Sahel zone than in the Sahara zone and lasts from June to October.

The Atlantic coast in the north is a steep coast with many bays and islands. A flat compensation coast stretches from Cap Timiris, the southernmost point of the Banc d’Arguin National Park, to the mouth of the Senegal River.

The coastal zone extends over a length of 754 kilometers. Oceanic trade winds from the Canary Islands result in a humid, temperate climate. Precipitation is minimal here; in Nouadhibou there is an average of 30 mm of rain per year.

Mauritania only has one permanently water-bearing river, Senegal. The country’s fertile floodplain regions are located along its course. The rest of the country is characterized by deeply incised wadis that criss-cross the plateaus. The infrequent rainfall that is diverted via the wadis accumulates in a few lakes. 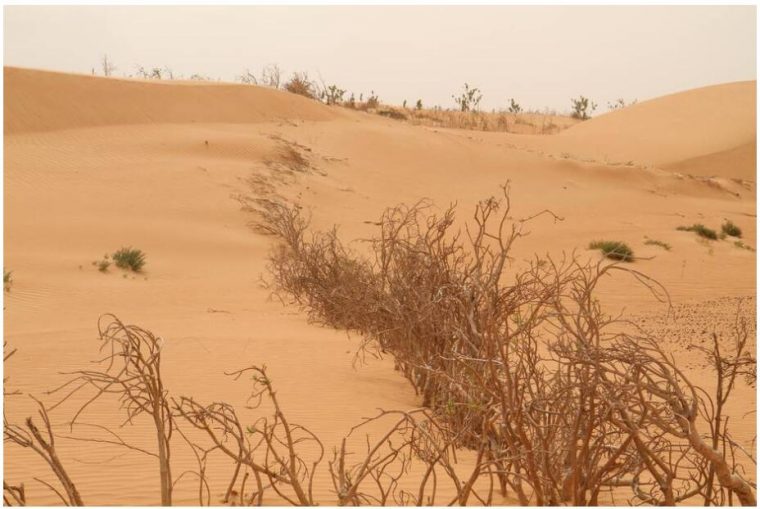