The last official census in Mauritania took place in 2000. Mauritania currently had 2,508,159 residents, 70% of whom belonged to the group of Arab-Berber Moors (Bidhan and Haratin). The remaining 30% are mostly Mauritanians of black African origin. Population figures are a political issue in Mauritania. A census planned for 2012 was canceled after violent protests and unrest. Black Mauritanians had to disclose their origins over several generations and ran the risk of losing their citizenship. The “Touche pas à ma nationalité” movement (Don’t touch my nationality) protested in the big cities against the racist census. There were clashes with security forces and more than 50 people were arrested.

According to businesscarriers, there are also more than 57,000 refugees in Mauritania. The vast majority are Malian civil war refugees in a camp in the southeast.

In 2018, 53.7% of Mauritanians lived in cities. The previously high proportion of nomads has fallen sharply. In 1957 90 percent of the population were still living as nomads. Larger settlements have emerged over the past centuries in places where there were wells and caravan routes crossed. Mauritania has only six cities with more than 40,000 residents. Regional centers are the capitals of the 12 regions.

The capital Nouakchott was only founded in 1960, shortly before independence, at a former French military post and is the largest city in Mauritania; the population is estimated at almost one million. The historical center is called “Ksar “. Nouadhibou is the second largest city in Mauritania and an important economic center. The government established a special economic zone here in 2013.

Mauritania has a road network of around 11,000 km, of which 4,000 km are tarred. The connection between Nouadhibou and Nouakchott was only completed in 2005 as one of the last sections of the Trans-African Highway Cairo-Dakar.

Since 1963 the only railway line has run from a mine in the north 700km across the Sahara to the port city of Nouadhibou. The trains that run here are among the longest and heaviest in the world. Over 200 wagons are pulled by up to four locomotives. The cargo: up to 21,000 tons of iron ore. Another interesting contribution from Deutschlandfunk.

The largest port in Mauritania is the natural port of Nouadhibou. Mauritanian iron ore, which comes by rail from the mining area around Zouérate, has been shipped from here since the 1960’s. The heart of the Mauritanian fishing industry also beats here. An expansion of the port, completed in 2019, makes Nouadhibou the first Mauritanian deep-sea port.

The new deep-sea port “Port Autonome de Nouakchott” (PANPA) was opened in 1986 and is a gift from the People’s Republic of China. It is also called “Port de l’Amitié” – Port of Friendship. Expansions led to a doubling of capacities in 2014.

In N’Diag o, 220 km south of Nouakchott on the border with Senegal, another port is about to be completed. 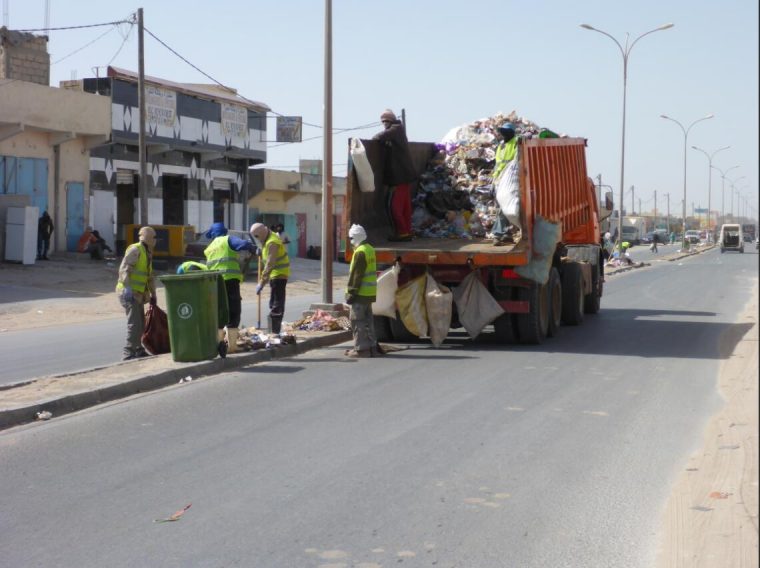 The national flag of Mauritania was changed by a referendum on August 6th, 2017. Two red stripes were added to the flag that was valid until then, as the top and bottom. It was established in the constitution of March 22, 1959 and officially introduced on April 1, i.e. before formal independence.

The national flag shows a golden crescent moon on an emerald green background, above a golden, five-pointed star. The red stripes below and above the emerald green background symbolize the blood of those who fought for Mauritania’s independence. The colors green and yellow are two pan-African colors and refer to the affiliation to the African continent. The color green, the crescent moon and the star are well-known symbols of Islam and a reference to the main religion of the country. The green also stands for hope for a better future and the yellow for the sand of the Sahara and the country’s mineral resources.

Mauritania uses a seal as its national coat of arms, which was also changed in 2017 by coloring the border of the seal red. It shows the motif of the flag of Mauritania, crescent moon and star in gold on a green disk in the background. In the foreground are a date palm and millet plants. The name of the country – Islamic Republic of Mauritania – is written around the seal in Arabic and French.

On the back is the national motto: Honneur – Fraternité – Justice (honor – brotherhood – justice). A detailed explanation of the coat of arms can be found in the flag dictionary.

Since the Independence Day celebrations on November 28, 2017, Mauritania also has a new national anthem.

The new hymn was drafted by a commission of seventy poets and intellectuals. The text glorifies the heroes of independence, the love for Mauritania and its Arab tradition. The setting by the Egyptian composer Rajih Sami Daoud is the subject of controversy.