In the 1970s, global population development – often referred to as a population explosion – was presented as the major threat to peaceful social and economic development. Pictures were taken where the poor part clung to an increasingly crowded planet. It was also warned that the rapid population growth in the south could lead to armed conflicts between the poor and the rich part of the world. (see also later article: The world passed 7 billion )

About every ten years, the UN has organized international population conferences. The first conference of participating states was held in Bucharest in 1974. There were sharp political differences between developing countries and socialist countries (Eastern Europe, China, etc.) on the one hand and Western industrialized countries on the other. The West argued that population growth was too high and had major economic, environmental and other negative consequences. Population growth therefore had to be curbed as soon as possible, and this had to be done by investing in family planning programs. The developing countries would rather have development and argued that this would also solve the “population problems”. The Indian Minister of Health stated that “Development is the best contraceptive”. Many countries in the south and east claimed that population growth in itself was not a problem and argued that the population is a country’s largest resource. Although China had launched a comprehensive family planning program, the country would have no reference to Chinese experience in the UN documents. According to trackaah, China led the criticism of the capitalist countries for false alarms about the “population explosion”.

At the next population conference, in Mexico City in 1984, there was much less political confrontation between South and North. It had now been widely accepted that high population growth was a problem and that many countries needed family planning. This time it was the United States that politicized the conference. The United States under President Reagan had changed its position: Population growth is not necessarily negative, and economic reforms and free competition will solve the problems, it was said. The United States strongly opposed abortion and stopped all assistance to countries, organizations and magazines that, according to the United States, approved (or commented positively on) abortion.

In Cairo in 1994, there were small contradictions between south and north. The contradictions this time concerned moral and ideological issues – with the Vatican as well as some Catholic and Islamic countries on the wings. The contentious issues concerned in particular abortion and human – especially unmarried – right to sexual and reproductive health. This includes everything that has to do with sexuality and reproduction, including treatment of sexually transmitted diseases, pregnancy control, safe births, contraception, sterility and genital mutilation.

Since 1994, there have been no major global population conferences, only follow-up sessions at the UN General Assembly in 1999 and 2004. The change of regime in the United States from Bill Clinton to George W. Bush in 2000 has largely led the United States back to the positions of 1984. Therefore, it would The radical action program of Cairo has certainly not been adopted today.

In the period 1965–70, the world’s population grew faster than ever before – and since then – by 2.1 per cent per year. Since 1970, growth has almost halved, to 1.2 percent per. year. Several questions then arise: How and why did the changes take place, and is there no longer any reason to worry about population growth?

The world’s population growth is determined by two factors – the birth rate and the death rate. In 1974, fertility was high in almost all developing countries, with an average of 5.4 children per woman. Since then, this has decreased in most countries in the south, to 3.6 children per woman, more than halving the distance to the reproduction level (the number of children needed to maintain the size of a population – zero growth in the long term) of 2.1 children. But we still find many countries with very high fertility, especially in Africa.

The long-term population development can be described with the concept of the demographic transition. By this is meant the transition from high to low death and birth rates – a transition that can be divided into four phases:

The term demographic transition is a useful tool for describing what has actually happened in different parts of the world, but it is debated to what extent it can be used as a theory of population development. The reasons for the demographic changes are many, but the main explanation is economic and social development, which affects both fertility and mortality. When economic growth gives people better advice, they need fewer children to stand up for themselves in old age and also the children become «more expensive», i.a. because they have to go to school and can not contribute as much as labor. With richer societies also often comes better education and knowledge and opportunities to avoid unwanted births. A possible direct connection is also considered, since declining infant mortality means that it is no longer necessary to have many children to ensure old age.

All countries in the north have completed the demographic transition and are in phase four. The countries in the south have begun the transition, but have come a long way. A number of countries, especially in Africa, have only had a decline in mortality and are therefore in phase two (declining death rate and high birth rate). But in most regions, i.a. in South Asia, North Africa and Latin America, fertility has also started to decline, and they are therefore in phase 3 (declining death and birth rates). Finally, we find a few countries in the south – especially in Southeast Asia – where fertility has fallen so much that they have reached phase four, in line with the countries in the north, with low death and birth rates. This applies i.a. China, Thailand, Cuba and Chile.

The increase in life expectancy in the world is particularly impressive. In 1950 it was about 47 years old and in 2005 67 years old. The increase in developing countries is particularly strong, from 41 in 1950 to 65 in 2005. This is “a remarkable achievement for mankind”, as the head of the UN Population Office once put it – “a remarkable achievement for humanity”. This is partly due to a sharp reduction in infant mortality (from 180 to 57 per 1,000 live births since 1950). Here, both the improvement of the standard of living (food, housing, etc.), better public hygiene (water, rubbish, toilets, etc.) and modern medicine (vaccines, penicillin, etc.) have played a role.

However, the development is not as straightforward as the simple description in the figure below indicates. In some countries, i.a. Bangladesh, fertility has declined without significant development. In other countries, there are no signs of fewer births despite some economic development. In some countries, the decline in birth rates seems to have stopped (including Kenya, Botswana, Ghana and Turkey). And as is well known, mortality has increased sharply in many countries due to. HIV / AIDS, especially in southern Africa, after many years of steady decline. In some countries, life expectancy is now about 20 years lower than it would have been without the AIDS epidemic (Botswana, Lesotho, Zimbabwe). But for developing countries as a whole, even for the least developed, the UN reckons that life expectancy will continue to increase.

The UN bases its population projections on the fact that the demographic transition will eventually be completed in all countries, but at different times. The last countries to complete the transition are located in Central Africa (Nigeria, Uganda, etc.). in the world of 9 billion. The figure is high, but significantly lower than previously predicted. And it is much lower than it would have been if fertility remained unchanged from today’s 2.6 children per woman globally. Then the population will grow to 12 billion in 2050.

Despite the sharp decline in population growth over the last 30 years, the world population continues to grow rapidly, at 70-80 million per year, close to the population of Germany. This will lead to the world population growing from 6.5 to 9 billion, if the UN’s average projection hits. About 90 percent of the population growth over the next 50 years will come in developing countries. Europe’s population will fall from today’s 730 to 650 million. Europe had more than twice as many people as Africa in 1950 (550 vs. 225 million), about the same number in 1995 (about 725 million) and will have only 1/3 of Africa in 2050 (650 vs. 1950 million) , according to the UN Intermediate Alternative.

An increasing proportion of the world’s population lives in cities – urbanization. Today, about 3 billion people live in urban areas, just under half of the population. By 2030, 5 billion – or over 60% – will live in cities. The increase is expected to be particularly strong in developing countries, where the urban population will double. This will cause major supply and pollution problems. But urban growth is not only negative; it is also where a large part of modern value creation takes place. And it may be easier to provide the population with good health and education services in the cities than in sparsely populated rural areas. 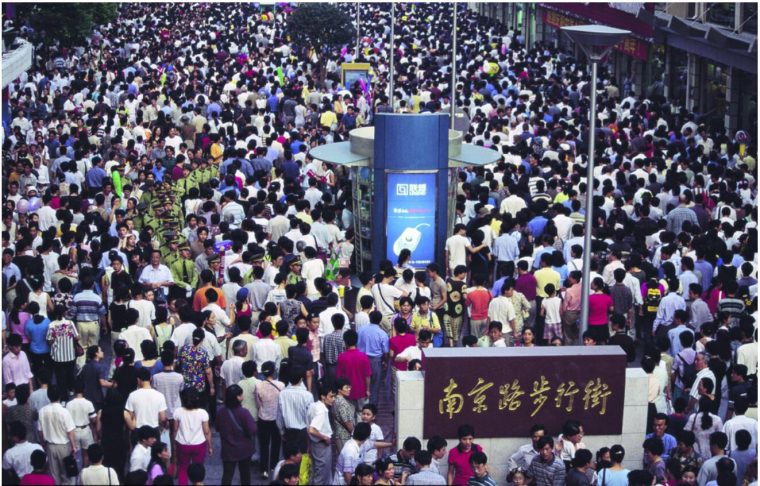