The beginnings of the history of this region are largely unknown. The main sources of pre-European history are oral narratives, legends and archaeological findings. Archaeological finds on Mauritanian territory show a settlement in the Neolithic.

The Bafour, a people of the original Berbers, lived in the land of today’s Mauritania as hunters, farmers and fishermen. The Imraguen, fishermen in the Banc d’Arguin and the Nemedi, hunters in southeast Mauritania are considered their descendants. Next to them lived the valley farmers who are considered to be the ancestors of the Tukulörs and Wolof.

The first waves of migration of nomadic Berbers from the north took place as early as the 1st century BC. Instead of. It is certain that they used horses for riding and knew how to forge iron, which gave them a clear advantage over the last representatives of the Neolithic population. They were also lucky enough to find the camel that came from the east around the 1st century BC. Arrived in Mauritania. The camel was the guarantee for human survival in this climatic zone and enabled the Berbers to wage war over a wide area.

The indigenous peoples were defeated after further waves of Berber immigration in the 7th and 8th centuries, the time of the arrival of Islam in North Africa, and either subdued or moved south or fled.

One of the Berber groups who invaded Mauritania in the 8th century were the Lamtuna. They took over political power in the Adrar and Hodh regions in the 9th century and founded the Sanhajah League together with two influential Berber groups (Messufa and Djodala).

From their capital, Aoudaghast, the Lamtuna control the loose bund and the western routes of the Trans-Saharan caravan trade.

In its heyday from 8.-10. In the 18th century, the Sanhajah Federation operated a decentralized policy based on two groups: nomadic, very independent Berbers who retained their traditional religion and urban, Muslim traders who were involved in the caravan trade.

The caravan trade operated by the Sanhajah traders connected the trading city of Sidschilmasa in the northern Maghreb and Koumbi Saleh, capital of the Empire of Ghana, in the south.

A small group of Sanhajah established a religious center from which they preached Islamic reform doctrines. As early as 1042 they pronounced a jihad (holy war) against infidels and deviants among the Sanhajah and thus founded the movement that later became known as the Almoravids.

The main goal of the Almoravids was the establishment of an Islamic empire by strictly applying Islamic law. According to cheeroutdoor, in Mauritania the Almoravids waged a war against Ghana (1062-1076), which ushered in the end of the dominance of the Kingdom of Ghana with the conquest of Koumbi Saleh.

For a short time, the Mauritanian Sanhajah dynasty of the Almoravid Kingdom controlled territory that stretched from Spain to Senegal.

The unity of Morocco and Mauritania in the Almoravid period justifies Moroccan claims to the territory of Mauritania to this day.

After less than forty years, however, the expansion of the Almoravids came to a standstill, due to the difficulties that arose from the administration of the now rapidly growing empire. At the same time their enemies in the north and south had evolved. The most important historical contribution of the Sanhajah and the Almoravids was the Islamization of western Magreb and West Africa.

Although the Almoravids had predominantly contacts with the Maghreb, the West African kings of Ghana, Mali and Songhai also influenced the history of Mauritania for more than 700 years from the 8th to the 15th century.

The south-west of Mauritania, including Tagent, belonged to the Kingdom of Ghana, which reached its peak in the 9th / 10th. Century brought the Sanhajah Berbers under his rule.

The Kingdom of Ghana also controlled the southern terminus of the Trans-Saharan trade in gold, ivory and salt. The conquest of Koumbi Saleh by the Almoravids in 1076 ended the hegenomy of Ghana, but the kingdom continued to exist for another 125 years.

The Kingdom of Mali was replaced by the Songhai Kingdom at the end of the 15th century.

But it was not until the end of the 16th century that strong Moroccan troops defeated the Songhai and ended the 700-year dominance of strong, centralized black kingdoms in large parts of present-day Mauritania. 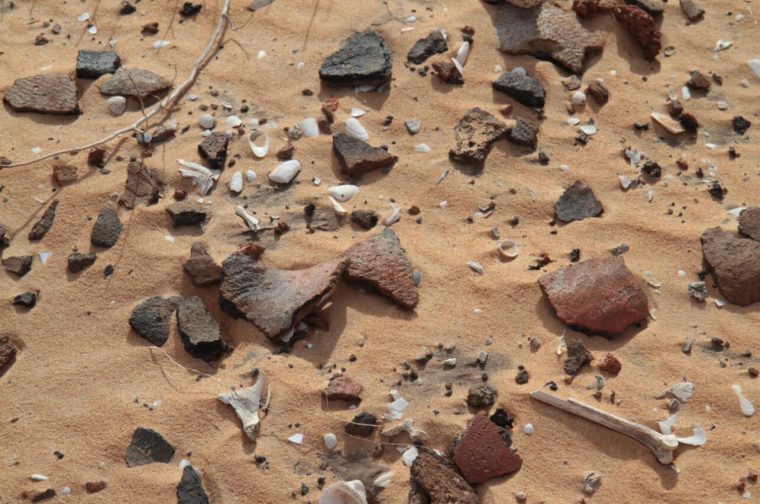