Politically and ideologically, the Assad regime is based primarily on pan-Arabism and socialism. The latter was no longer mentioned in the new constitution of 2012. In addition, the country is characterized by a complex system of patronage. In addition to supporting Russia, Iran and China, the Syrian security services (mukhabarat) play a central role in stabilizing the regime’s rule. Essentially, the mukhabarat consist of three main services of the General Intelligence Directorate (GID), the Military Intelligence Service (MIS) and the Air Force Intelligence Service (AIS or AFI). They report to the President, who determines the competencies of the respective service and controls the activities of the rival services.

According to philosophynearby, the Syrian Arab Republic can be understood as a presidential republic with a socialist character. The president has executive power, but this should not hide the fact that the implementation of laws depends on the consensus of the political core elite. Da Bashar al-Assad, the son of Hafez al-Assad, was too young when he was about to take over the line of succession in 2000, the constitution was simply tailored for him and the minimum age for the president was reduced to 34 years. This could only be successful because Hafez al-Asad’s close confidants, who were interested in the continued existence of the status quo and securing their political privileges, made the transfer of power possible. Since then, Bashar has also been Commander-in-Chief of the Armed Forces and General Secretary of the Ba’ath Party. He appoints deputies and ministers and has legislative powers with the right to veto laws passed by parliament, which can, however, be overcome with a 2/3 majority. Constitutional amendments require his approval and he appoints members of the Supreme Constitutional Court.

The parliament consists of 250 members. In 1991 the seats in parliament were expanded – there were 70 more seats for independent candidates. 127 seats are reserved for workers and peasants (representatives of the mass organizations of the Ba’ath Party). The parties of the National Progress Front, including the Ba’ath Party, enter parliament via the unified list. Parliamentary elections were held in Syria in July 2020. As expected, President Bashar al Assad’s ruling Baath party won 183 of the 250 seats in the Syrian People’s Chamber. The remaining 67 seats went to businessmen who also support Assad. The opposition criticized the elections as illegal. Corruption, a lack of legitimacy by authorities and the human rights situation have caused deep frustration in large parts of the population.

The provincial governors are appointed by the Minister of the Interior. They must report directly to the President and control the provincial governments as well as the local offices of the ministries and state-owned companies. Together with the local chairmen of the Ba’ath Party and the secret service employees, they represent the senior civil servants. This is the direct stepping stone into both the higher echelons of intelligence and government positions.

Each province has elected bodies, as do the 106 urban districts that qualified as cities in 2006, the 248 cities and 207 villages.

The Syrian flag consists of a red, a white and a black horizontal stripe. Two green stars stand for Egypt and Syria on the white. This flag dates from the time of the United Arab Republic (1958-1961) and has been used again since 1980.

The uprising against the ruling regime that broke out in March 2011 uses a flag that was Syria’s national flag from 1932 to 1958 and from 1961 to 1963. It consists of three horizontal stripes in green, white and black and three five-pointed red stars. In doing so, the protesters clearly oppose the rule of the Ba’ath Party, which has ruled since 1963.

The Syrian national coat of arms, which was introduced in 1946, consists of a falcon looking to the right. The shield on his chest shows the Syrian flag, which is framed downward by two branches of laurel. Under these branches, on a green banner, the official name of Syria is written in Arabic: Syrian Arab Republic. 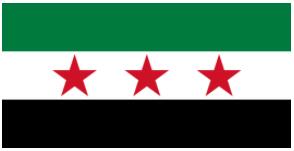 The Syrian lira (pound) is the currency of Syria. The largest banknote is two thousand Syrian lira (pound). There are also notes of 2000, 1000, 500, 200, 100 and 50 Lira. Coins have a value of 1, 2, 5, 10 and 25 lira. A few one- and two-lira coins are also still in circulation. The import and export of Syrian lira is prohibited. In the Syrian civil war since 2011, the lira was devalued against the US dollar. When traveling to Syria, it is therefore not advisable to supply yourself with lira abroad, especially since the rate is significantly less favorable than in Syria itself due to the lack of convertibility.

The Syrian national anthem is called “Humat ad-Dijar” – protector of the country – in English Defenders of the realm.