According to payhelpcenter, there is no independent media landscape in Syria. State and private media, which were founded especially since Bashar al-Assad took office in 2000, are subject to strict censorship. Important sources of information are Reporters Without Borders: Syria and Freedom of the Press – Syria. In 2018 the government created a special court for “information and communication crimes. In addition, the regime is trying to change the narrative of the conflict through alternative media platforms on the Internet: Citizen journalists equipped with exclusive access now report on the successes of the army and how life in the Areas under Assad’s control continue to flourish

In addition to state repression, journalists are also exposed to intimidation and violence from almost all parties to the civil war.

Al-Baath is the newspaper of the ruling Ba’ath Party. According to the company, the circulation is 70,000 copies. The newspaper employs a thousand people, sixty of them in the editorial office.

Al-Thawra was founded in 1964 and claims to have a circulation of 80,000 copies. The newspaper is considered the most popular of the three national newspapers. The editorial team consists of 140 editors.

Tishreen has been published since 1975 and, according to its own information, has a circulation of around 70,000 copies per day. The newspaper employs 800 people.

Al-Watan was founded in 2007 as the so-called first independent newspaper in Syria. It is owned by the richest Syrian entrepreneur, Rami Makhluf, a cousin of President Bashar al-Assad. It has a circulation of 30,000, the editorial team consists of around 50 mostly young journalists, many of them university graduates, who have been trained in-house in organized training seminars.

The daily newspaper Baladna has been published in tabloid format since 2006; Edition unknown. Baladna is primarily aimed at a young target group.

The newspaper Syria Times, founded in 1980, is housed in the editorial offices of Tishreen and serves as the international mouthpiece of the Syrian government. Syria Times broadcasts news from the state news agency SANA. S he has a circulation of up to 3,000 copies per day.

Syria Report was founded in 2001 in Paris. The editor-in-chief lives in Damascus. Subscription: $ 375 a year.

In 2011, under pressure from the demonstrations, a new media law was passed, which in practice shows a large gap between claims and reality. 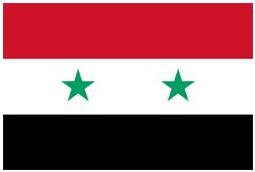 The human rights situation in Syria, which was already catastrophic before the uprisings, has deteriorated massively since 2011. The government responded to the peaceful protests with mass arrests and systematic torture. A brutal civil war ensued that cost more than 500,000 lives, 6.1 million people were displaced within the country and more than 5.6 million fled abroad. Whole cities were destroyed. Due to the increasing militarization and brutalization of the uprising, human rights violations were increasing in Syria. Human Rights Watch: World Report 2019 Syria provides an overview of the human rights situation in Syria. Civilians and civil institutions were deliberately bombed. 69 percent of people eke out an existence in extreme poverty. All parties involved in the armed conflict in Syria commit war crimes, serious violations of international humanitarian law and gross human rights violations that have not been punished. The deprivation of food and drinking water is used as a weapon. Ethnic cleansing and arbitrary detention, extrajudicial executions, kidnappings, and torture are everyday crimes against humanity in Syria. The thousands of photos of people who died under torture smuggled out of the country by the Syrian military photographer “Caesar” are considered credible by experts and are evidence of the systematic use of torture in Syrian military prisons. Human Rights Watch was able to identify some of the victims in the photos and speak to family members. Thousands of people are said to have died in the torture centers of the Syrian regime. In the past year, the human rights situation in Syria has deteriorated in many ways, for example the Syrian-Russian military alliance used prohibited weapons against the civilian population in the reconquest of the opposition-occupied areas. The government has also expropriated Syrians who have fled without compensation. Amnesty International and Amnesty International provide information on the human rights situation in SyriaFreedom House.

Kurd Watch regularly provides information on the current human rights situation of the Kurds. Around 12 percent of the Syrian population belong to the Kurds ethnic group, who are deprived of basic human rights.

A source frequently cited by the Western and Arab media during the revolution on human rights issues and the use of force is the London-based Syrian organization Syrian Observatory For Human Rights. She receives her information directly from domestic activists.