In addition to the Free Syrian Army (FSA), the militant opposition is shaped by Islamist organizations that are either close to the Islamic States (IS) or Al-Qaeda.

According to naturegnosis, the Free Syrian Army (FSA) is the armed arm of the group “National Coalition of Syrian Revolutionary and Opposition Forces” and is by no means a uniform organization. It is an alliance of different organizations, which in turn pursue different interests. They only agree on the goal of ousting Assad. The national coalition has not yet been able to present a project for Syria after Assad.

While the FSA enjoyed great success in Syria at the beginning of the war, it now plays a rudimentary role in the conflict. Large areas that were controlled by the FSA have either been recaptured by the army or given to Islamist militias.

One of the main weaknesses of the FSA is the fact that the political leadership has different loyalties to foreign powers. The National Coalition of the Syrian Revolutionary and Opposition Forces was founded on November 11, 2012 in Doha / Qatar. It was initially supported financially and logistically by Qatar, Saudi Arabia and Turkey. The USA, Great Britain and France also provided material and supported the national coalition in international bodies. With the increasing regional tensions between Saudi Arabia and Qatar, the political disagreement of the groups within the national coalition and the rise of the Islamists, the interests of the sponsors shifted.

The “Islamic State” (IS) is an Islamist terrorist militia that has split off from the terrorist organization Al-Qaeda and is fighting to establish an Islamic caliphate according to its religious ideas. Thousands of fighters from all over the world migrated to Syria after the proclamation of the caliphate on June 29, 2014 by Abu Bakr al-Baghdad in order to consolidate the caliphate. They conquered large parts of Syria and Iraq and established a brutal terror regime. The militia is financed by appropriating the money reserves of state banks in conquered areas, robbery, extortion, smuggling and the slave trade.

After many years of success, ISIS was declared defeated in March 2019 after the Battle of Baghus. Thousands of IS fighters are said to have gone into hiding in the vast desert area of Syria and Iraq. It can be assumed that the IS in Syria still has leaders, fighters, supporters and resources, so that these terrorist organizations play a relevant destabilizing role in the Syrian conflict.

A rebel group founded in 2011 and, according to experts, financed by Turkey and the Gulf States with a Salafist orientation, but which presents itself to the West as moderate. It currently holds mainly areas in northern Syria in the Idlib province. It cooperates militarily with the national coalition, but is not part of it.

The former Al-Nusra Front is a jihadist organization that originated from Al Qaeda and that wants to establish an Islamic emirate in Syria. The United States classifies Fatah al-Sham as a terrorist organization.

Many international actors are involved in the Syrian “civil” war – for very different interests: military, religious, economic or security-political.

On the opposition side, the western states, the USA, Turkey and the Gulf states Saudi Arabia and Qatar are active. They not only represent different goals, some of them contradicting each other, but relationships between the countries are very tense. The US supports the Syrian Kurds and their combat units, while Turkey fights precisely these units as terrorists. Saudi Arabia has not only isolated Qatar politically and disrupted diplomatic relations. It accuses Qatar of funding Islamist terrorism.

Saudi Arabia wants to break the influence of Shiite Iran in Syria, but does not want to strengthen the role of the Muslim Brotherhood there. But this is exactly in the interests of Turkey, since the Muslim Brotherhood is more of a pro-Turkish policy. However, Turkey does not want to strengthen the position of the Kurds under any circumstances, as this manifests the Turkish Kurds’ aspirations for autonomy. However, the Syrian Kurds are the US’s most important allies in Syria. The USA, but also other Western states, have been pursuing the goal of replacing Assad and his regime since the outbreak of war. Behind this is the hope that the regime will be replaced by a system that is friendlier to the West and that turns away from Russia.

The regime’s main allies are Russia, Iran and China. Russia and China have used their right of veto several times in the interests of Assad in the Security Council. While China has basically no interest in regime change, Assad is Russia’s most important geostrategic ally in the Middle East, which grants him access to the Mediterranean in the form of a naval base. Syria has been an ally of Iran since the Iraq-Iran war between 1980-1988. This alliance guarantees Iran access to the Arab-Israeli conflict, which underlines the regional power of Iran and strengthens the so-called “axis of resistance” to which Iran, Syria, Hezbollah, Hamas and other groups belong. Many of these groups have sent fighters to Syria and are supporting the regime there. 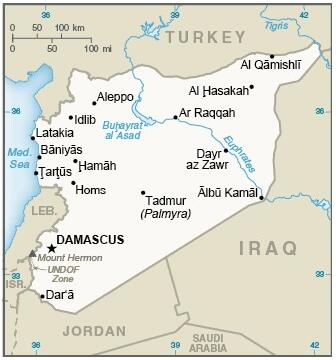