According to militarynous, the civil war is destroying the economy in Syria. Today around 90 percent of the Syrian population live below the poverty line. Around 60 percent of the population live in dire poverty and have hardly any access to food, drinking water or health care. In many cities the infrastructure has been destroyed, roads, electricity and water pipes only function to a limited extent or not at all. More than 400,000 buildings were destroyed or badly damaged – including schools, hospitals, waterworks and energy supply centers. Many farmers lost their livelihoods due to the war. Harvest losses and losses in livestock farming are estimated at more than 13 billion euros. The manufacturing industry is also suffering massively from the consequences of the war. Qualified personnel are on the run or in the warring parties. The production costs are very high and the sales markets have collapsed. The sanctions make the situation worse. Of the 130,000 production facilities in Syria, only half are left. While before the armed conflicts in Syria began in 2011, 80 percent of the Syrian economy was dominated by small and medium-sized enterprises, today large parts of the Syrian economy are controlled by a few. In addition, many academics have left the country. This loss to the Syrian economy means that 538. 000 jobs are lost each year. In the meantime, three out of four adults no longer have any professional activity.

Since the outbreak of civil war, the Syrian lira has lost around 90 percent of its value. In addition, many everyday goods have become scarce, which is also driving up prices. Current economic data are practically unavailable or should be treated with caution, but it can be said that entire professions and industries have disappeared since the outbreak of war. The tourism industry has completely collapsed. Instead, a shadow economy is flourishing. The Syrian economy has developed into a war economy over the past few years. The corruption that was already widespread before the uprising has assumed even greater proportions. But not only the regime benefits from the situation, militias of all stripes are also among the beneficiaries. Smuggling is flourishing, and arrests and kidnappings have become an important pillar of the economy.

The Syrian economy before the uprising

Syria has long been one of the most important countries in the Mediterranean. From here, not only goods, but also knowledge continued to flow not least towards the west. After long-distance trade to India and China had been almost completely taken over by the Europeans, Syria was pushed from the center to the periphery of the world economy and has been one of the main victims of the Middle East conflict since its independence from the colonial power France. For a long time self-sufficient, the country is not only in a political but also an economic crisis. The situation is exacerbated by the fact that agriculture has suffered from years of drought and has fallen fallow in many regions of the country as a result of the war. But the crisis was also structural. Oil had become the main source of foreign exchange for decades. Its supplies are not only running low, oil exports, like the Syrian private sector, have been completely affected by sanctions since 2011. In times of need, Syria turned more and more economically to Iran, with whom it finally wanted to set up a free trade area after a corresponding agreement with Lebanon, Turkey and Jordan and participation in the GAFTA agreement of the Arab League. 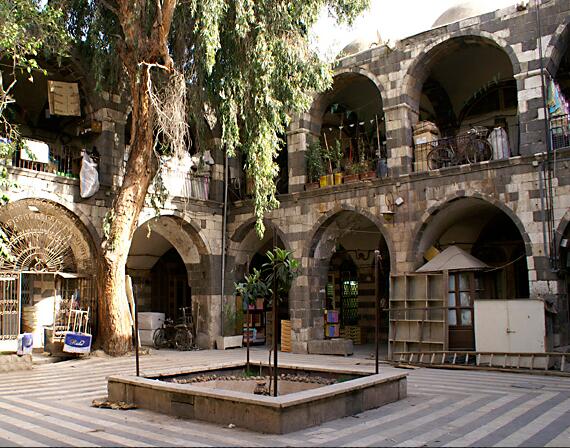 On the other hand, Syria had long since opened up to the Washington Consensus. The result was growing competitive pressure and a rapidly rising poverty rate – among other things reasons for the outbreak of protests against the government in March 2011.

Before the uprising, Syria’s economy was in the middle of the world, just behind its neighbor Iraq, but far behind countries like Turkey and Iran. Various yearbooks, studies, statistics, overview articles and publications provide the key data on the Syrian economy: