In 2010, Mexico had a double anniversary: ​​it was 200 years since the liberation from Spain began, and 100 years since the outbreak of the Mexican Revolution – the one that laid the foundation for the current Mexican state. But it was a celebration of distaste. For over half a century, according to INTERNETSAILORS, Mexico has been regarded as one of Latin America’s most stable, albeit authoritarian, states. Political and economic reforms in the 1980s and 1990s provided the basis for more democratic governance, and the world had great faith in Mexico’s economic prospects. The arrows also pointed in the right direction for homicide rates and political violence.

The contrast is great to the current situation where the so-called war against the drug cartels in 2010 claimed more lives than the war in Afghanistan. And we constantly hear that Mexico is on its way to becoming a so-called “failed state”. Many people therefore thought that there was not much to celebrate in 2010.

2: The drug war in brief

In 2006, incumbent President Felipe Calderón came to power in Mexico. Some believe he won a hair-raising victory over rival Andrés Manuel Lopez Obrador. Others believe the victory was the result of “irregularities”. Not only did Calderón get a weak mandate. He took over a country marked by a handful of drug cartels that had developed into well-organized, heavily armed groups that in many areas threatened the control of the Mexican state and created local waves of violence. This was especially true in the president’s home state of Michoacán.

Calderón pointed to the corruption and lack of capacity of local police forces as a major reason why the cartels had managed to consolidate their position, and decided to deploy the military in the fight against them. One of the first things he did after occupying the presidential palace was to send a force of 6,500 men to Michoacán. This was later escalated to include half of the states in Mexico, and on average 45,000 men have been involved in the drug war.

After alarming death tolls and signs that the drug war was spreading to the other side of the 3,000-kilometer-long border with the United States, the United States also stepped up its involvement. In 2008, a development assistance program (the Merida plan) was launched with a budget of USD 1.6 billion (approximately NOK 9.5 billion) over a period of three years. It focused on training military and police personnel, exchanging intelligence information and purchasing advanced surveillance equipment. At the same time, efforts against money laundering have increased, and the National Guard has been sent to guard the border.

After Calderón’s offensive has been going on for a little over three years, something has been achieved: A number of leaders for the drug cartels (around 20) have been taken. Seizures of drugs smuggled across the border into the United States have increased, as have weapons smuggled the other way. But at the same time, the use of violence related to drug trafficking has grown explosively. As of January 1, 2011, 34,612 people had been killed in the drug war.

2010 was by far the most violent year with 15,273 deaths, up from 9635 in 2009 and 6844 in 2008. The increase is particularly marked in the states of Chihuahua, Sinaloa and Tamaulipas and Nuevo León (see map). Of these states, the Chihuahua stands out with an increase from 244 homicides related to organized crime in 2007 to 4427 in 2010. In other words, the Chihuahua with around 4 percent of Mexico’s population today accounts for almost a third of all drug homicides.

But the killing wave has also reached new areas – areas that were previously less affected. The modern city of Monterrey in northeastern Mexico was in 2010 for the first time the scene of bloody battles between cartels. At the same time, the number of abuses against the civilian population committed by the military and police forces deployed in the fight against the cartels increased. Studies of the death toll show that violence has increased the most where the military has been deployed.

So why aren’t the strategies succeeding in taking the drug peaks in Mexico to weaken the cartels? To understand this, we must look at the history of drug trafficking in the country and how it has changed with changing economic, political and international conditions.

3: The origin of drug trafficking

The starting point for drug trafficking in Mexico was a certain cultivation of marijuana and opium poppies and the production of various opiates that were exported to the United States. The business was banned in 1927, but Mexico was still politically unstable after the revolution (1910-1920), and the ban was not complied with. As state power was centralized and the state expanded under the leadership of the Revolutionary Institutional Party (PRI) throughout the 1930s and 1940s, close ties were established between drug producers and the authorities.

An informal understanding developed between the PRI-controlled state and drug producers and exporters. According to this, the latter contributed financially to the authorities, kept the level of violence to a minimum and reinvested the profits in Mexico, while the state gave the business its protection. This, which is called the ” regulatory model “, fit in many ways well with the economic model that Mexico followed at the time, with a focus on building up domestic industry under state protection. The model contributed to a steady economic growth in the period 1940-1970, also called “the Mexican miracle”.

Relations with the United States were ambiguous throughout the period . On the one hand, the United States encouraged the production of morphine and other opiates in connection with World War II and the Vietnam War. The country was very concerned that Mexico should remain stable for geopolitical reasons. Therefore, parts of the policy were characterized by “tacit acceptance” of Mexico’s drug exports. On the other hand, drug laws in the United States were gradually tightened, and the country occasionally protested against the flow of drugs to the United States and non-compliance with the laws in Mexico.

The regulatory model was put under pressure in the 1970s for several reasons. One of them was that heroin was launched as a new Mexican export item. This was largely due to a US-backed campaign that succeeded in virtually eliminating heroin production in Turkey, and that Mexican heroin took its place in the market. In the early 1980s, the United States sought to stop the flow of cocaine from Colombia, which was transported by sea across the Caribbean via Florida and into the US market. The increased surveillance of this drug route contributed to traffic moving to the highway via Central America and through Mexico. Thus, Mexico became not only a production and export country for heroin and marijuana, but also a transit country.for cocaine.

Thus, Mexican cartels came into contact with the more violent Colombian cartels. Their main contact in Mexico was Miguel Angel Félix Gallardo, often referred to as the godfather of Mexican drug cartels ( El Padrino ) who already had control of the routes to the United States. When the Colombian cartels were weakened in the 1990s after the peaks were taken and their property controlled to a greater extent, the control was taken over by the Mexican cartels. The United States also established closer cooperation with the Mexican authorities and carried out several major “operations” against the cartels.

As a result of this pressure, El Padrino split up its business in 1989, thus contributing to a decentralized cartel structure . Since then, the various cartels have partly competed for and partly shared control of smuggling and an increasing local sale of cocaine, heroin, marijuana and eventually also the synthetic Mexican-produced drug methamphetamine, to the United States. 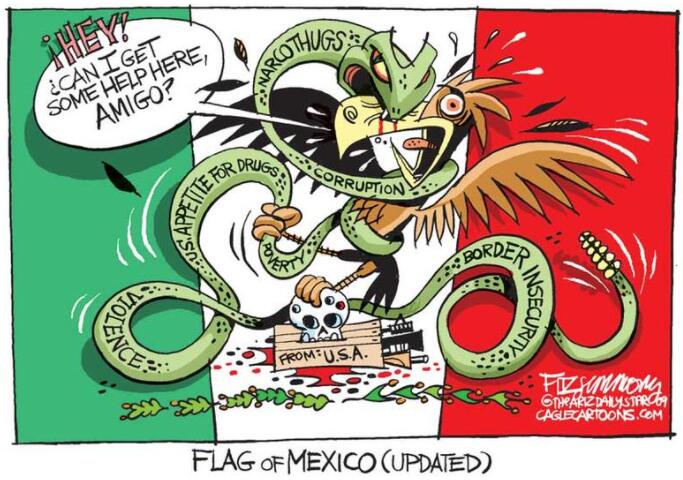