Venice is one of Italy’s most important tourist cities, and a city with such a well-preserved history that a trip there will be experienced as a journey back in time.

The city is known for its many rivers and canals – and not least crossing bridges – and has an architecture and building style that dates from the 17th century. The best thing about the city is that everything seems to be very well preserved, so a stay in Venice is a sight in itself.

Venice is located in the northeast of Italy, and is home to almost 300,000 Italians. The city’s old building structure is starting to get tired, and variations in the water level mean that Venice will hardly look the way it does today in a hundred years. If you want to do as 15 million other tourists do every single year, then there is no reason to postpone the trip to venerable Venice. Venice is truly a beautiful and romantic destination! 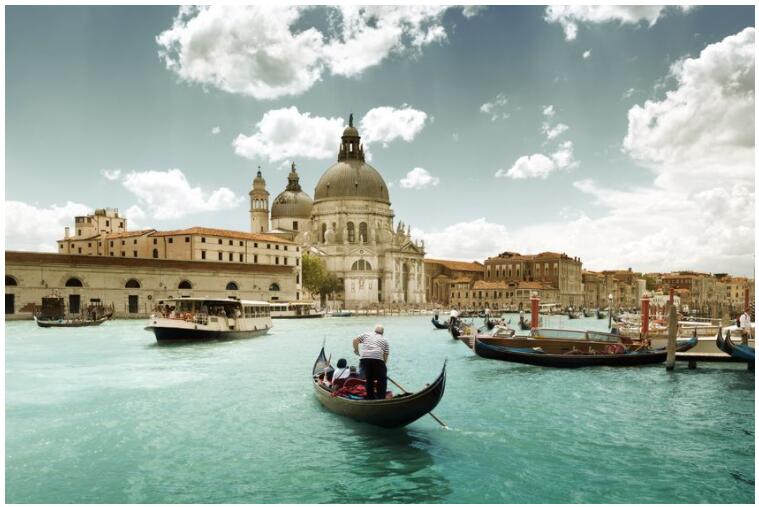 A hotel in central Venice will soon cost you a lot more than if you live on the outskirts of the city, but if you are visiting the city for the first time, we recommend that you find a hotel in the San Marco district near St. Mark’s Square. It is in this area that most of the sights and attractions are located, and it is probably in this area that you will stay most of the time. If you want to live in a slightly less touristy part of Venice, the Dorsoduro district is a good alternative. Here you still live centrally, but the area is not as crowded. Here we have selected three hotels that all receive good feedback from previous guests and which are also centrally located in Venice.

The hotel is built with 4 stars and here you can expect beautiful and elegant rooms and very good service.

Here you live centrally and nicely in the heart of Venice, but still in a sheltered and quiet area.

This hotel is located in the heart of bustling San Marco in the heart of Venice. Here you are just a few minutes walk from famous sights such as St. Mark’s Square, the Doge’s Palace and the Rialto Bridge.

Although you stay very centrally in this hotel, it is equally quiet and comfortable inside the hotel.

Friendly staff, as well as spacious and gorgeous rooms make this hotel a sure winner!

Rosa Salva is a very centrally located hotel in the San Marco district with a short distance to a number of central sights.

This is a relatively new and modern hotel that is a little cheaper than the other two options.

The hotel receives consistently good feedback from previous guests. Here you get a lot for your money.

It is best in the summer that you should visit Venice, but in the middle of summer the heat can be a bit excessive for some. Therefore, spring and autumn are also a good time to visit the city of the river canals. During the tourist season, there are direct flights from Oslo Airport, but outside the season you must expect at least one flight change. As a member of the EU, Italy is obliged to use the euro as its currency. One euro is equivalent to about eight Norwegian kroner.

As a “tourist city in the whole world”, the locals know how to get paid by tourists. The price level in the city center and along the tourist attractions is therefore quite high, and Venice will be experienced as anything but a cheap city to holiday in. However, the city is considered safe to travel in for tourists, and one will rarely be exposed to anything criminal. The drinking water from the tap should only be used for brushing teeth.

Venice is referred to by many as a sight in itself, and here one can walk all day without getting enough of the medieval style and the many sights. A trip with a river boat is of course mandatory on a trip to Venice, as well as a view of the many historic buildings. 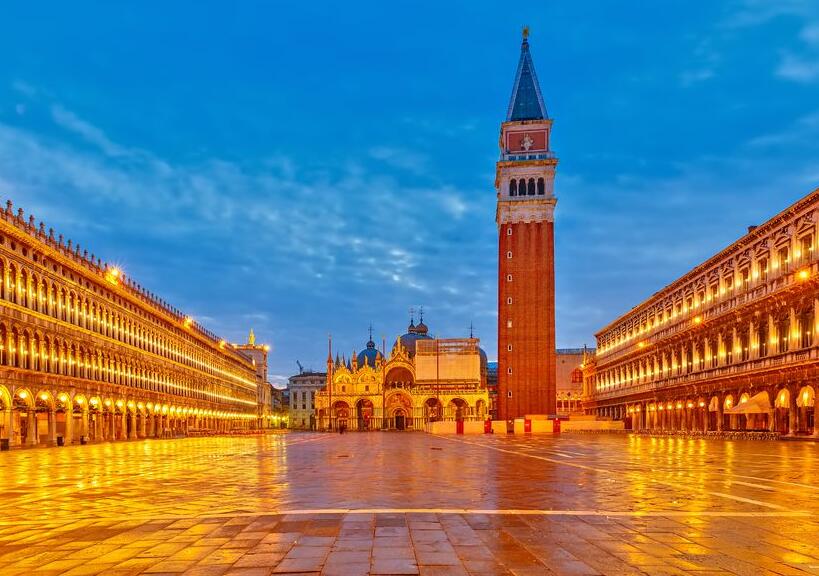 St. Mark’s Square is the most popular tourist area in Venice, and can in many ways be compared to a giant square. There is a huge, open area close to the church, where there is everything from stalls to restaurants and entertainment. You will probably end up here many times during your stay in Venice. 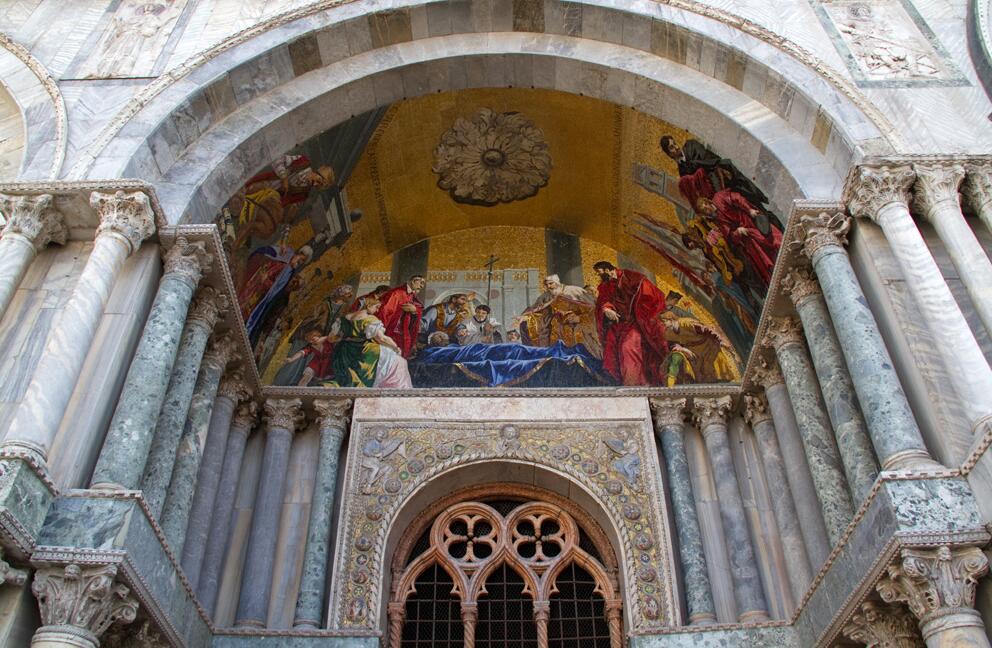 No matter which big city you holiday in, you almost have to stop by a historic church. St. Mark’s Basilica has been voted by many as the most beautiful church in the world, both inside and out. The giant church also has three small museums inside. You can also climb to the top of the church tower and enjoy a fantastic view of St. Mark’s Square.

Boat trip on the Grand Canal 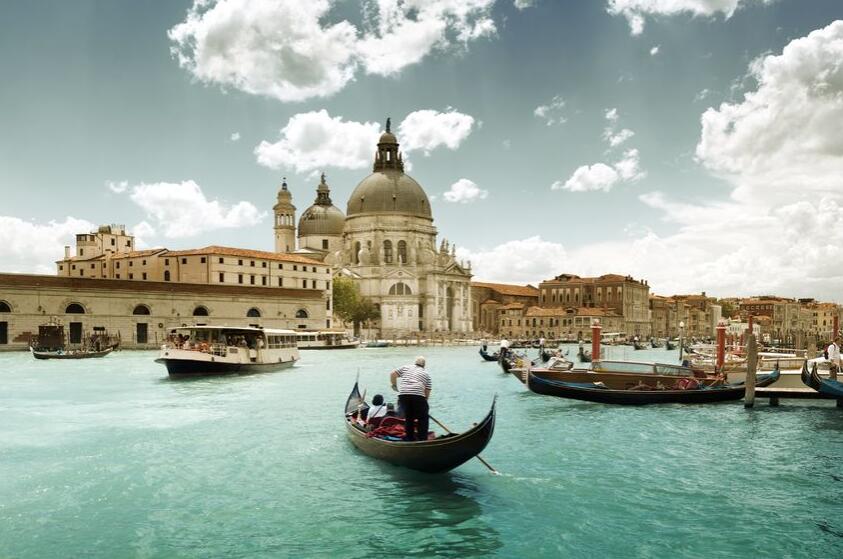 The Grand Canal can in many ways be considered the main traffic route in Venzia, and is the same as “The Strip” is for Las Vegas. It is the widest canal (and the busiest), and one should definitely take a ride on a river boat to see the city from a new perspective. These tours also take you past most of the sights. 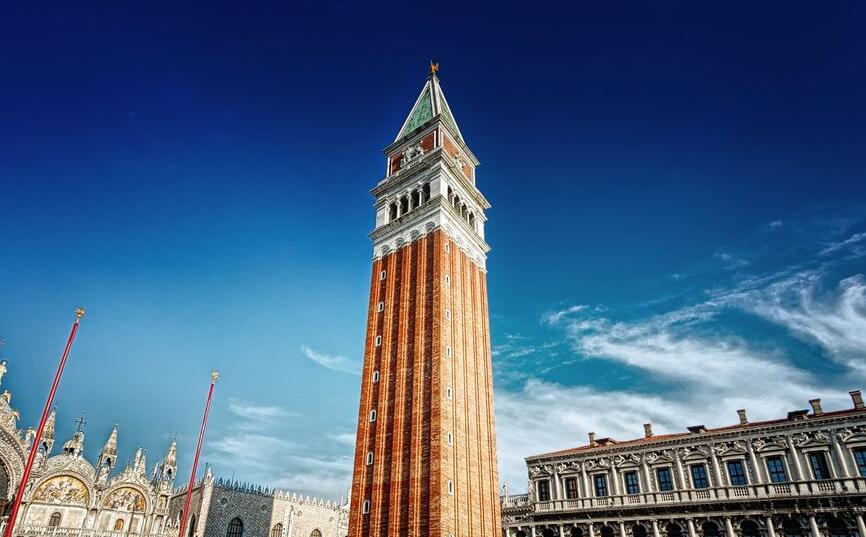 If you want to enjoy the city’s best views, do so in the Campanile bell tower. It is a historic building that unfortunately collapsed in 1902. Ten years later it was rebuilt as a faithful copy, with many of the same stones, and the Campanile was again the city’s tallest building that broods almost a hundred meters above the ground. There is a lift to the top. 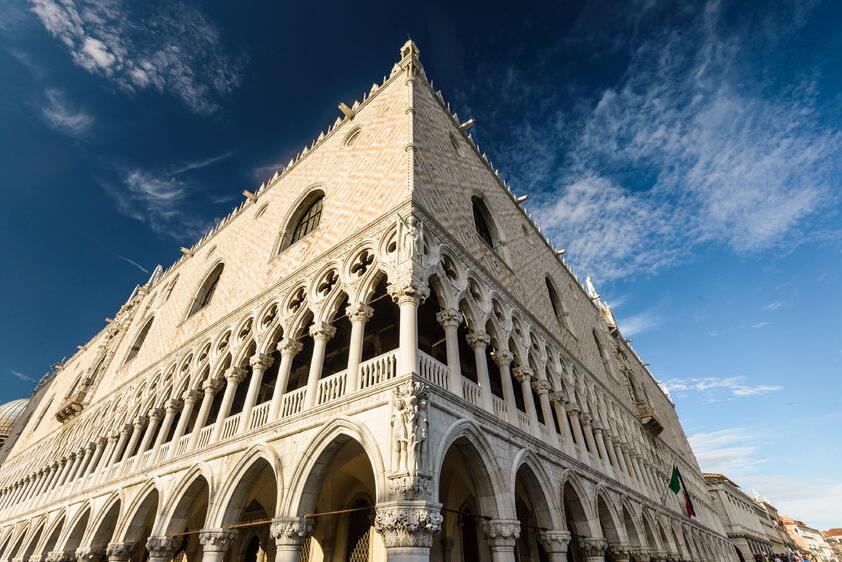 The Doge’s Palace is one of the many historic buildings in Venice. It was built as early as the 12th century, and has been both a government building, a courtroom and a royal palace. It is still well preserved and a sight in itself. 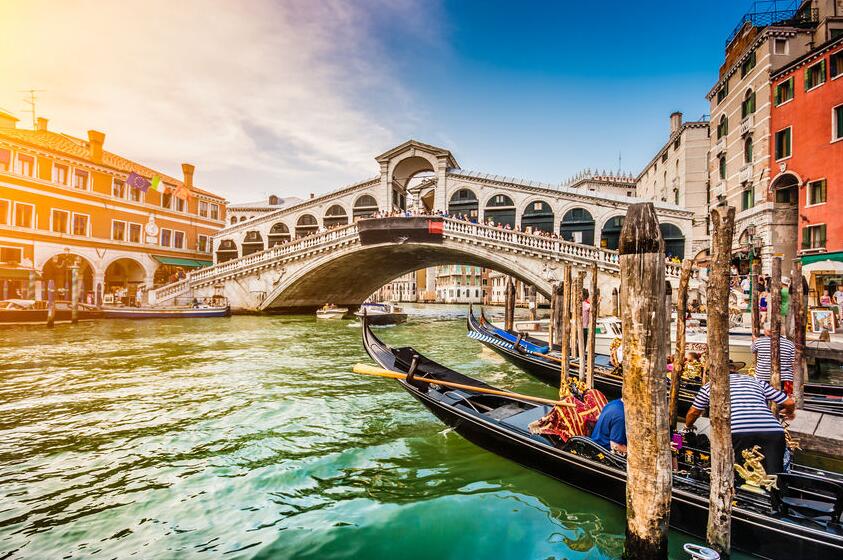 The famous Rialto Bridge in Venice is without a doubt one of the most famous landmarks in the city and it is also the oldest bridge that crosses the Grand Canal. A sight to see once you are in Venice. Perhaps best if you see it from a river boat. 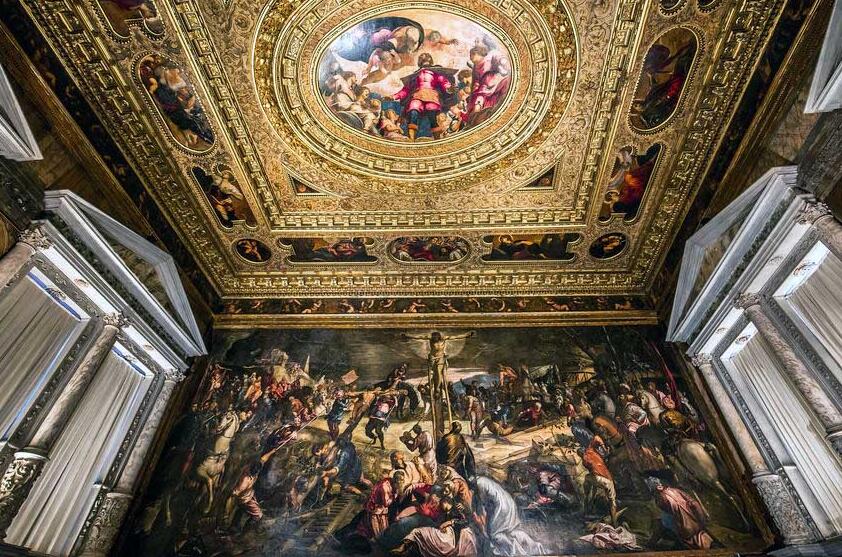 Scuola Grande di San Rocco is a beautiful building in Venice that is known for housing some of the artist Tintoretto’s very best works. You do not have to be interested in art to be enchanted by the fantastic paintings and the beautiful decorations. 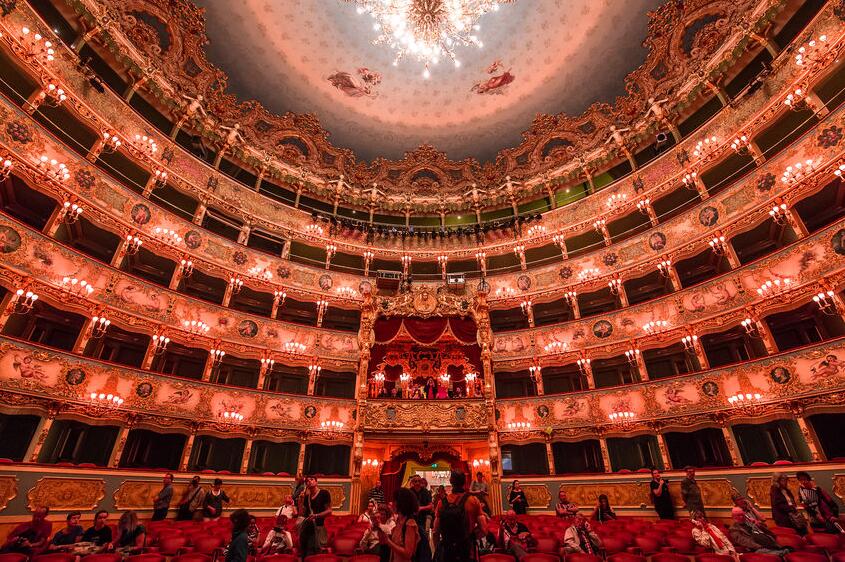 Teatro La Fenice is a beautiful opera house in Venice. Despite the fact that the building has burned down twice, it has been rebuilt both times and is now one of the most popular sights in Venice. Not only is a beautiful spectacle built, the opera performances performed here are also of the highest class. 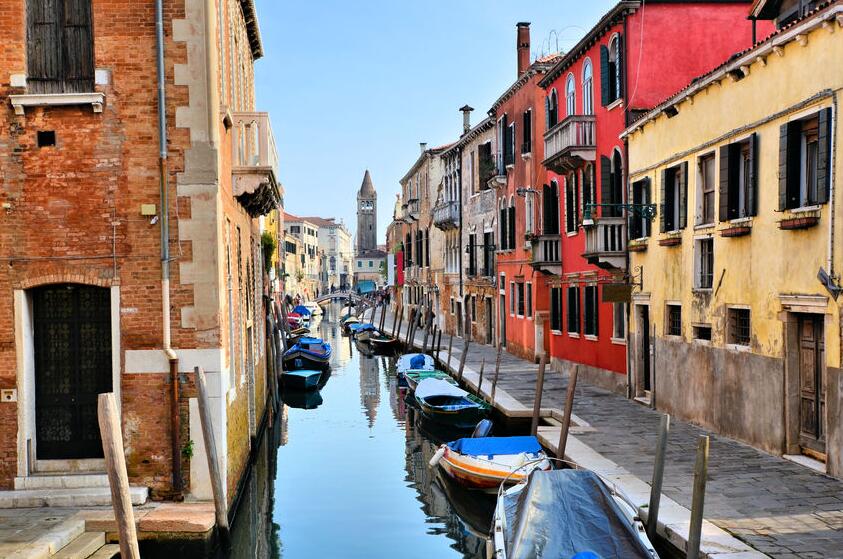 The Dorsoduro district is known as a slightly quieter area of ​​Venice, and in contrast to the area around St. Mark’s Square, there are many fewer tourists here. The area can in many ways be said to be a more authentic part of Venice and the place where people actually live. Here, the laundry hangs outside the window, and the district is characterized by cozy little shops and galleries. The district is also incredibly beautiful, here it is recommended to just trudge around and enjoy. 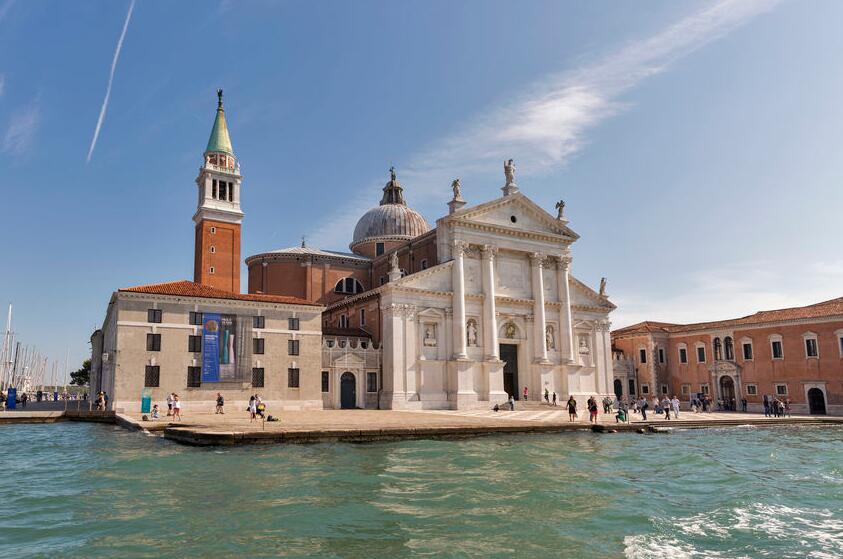